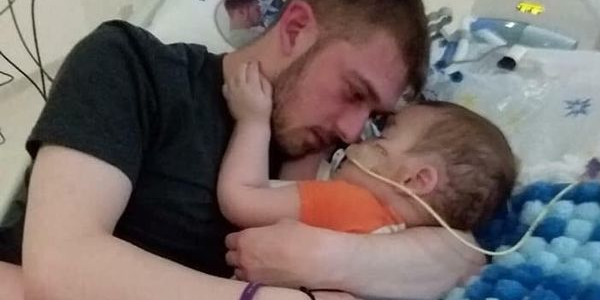 Last week Pope Francis tweeted his support for Alfie Evans and his family.

The parents of a seriously ill child in Liverpool, England, are challenging a British court ruling that would require doctors to shut off the child’s life support.

In February the court ruled that doctors could stop treating 23-month-old Alfie Evans, who suffers from a degenerative brain disease, encephalomyopathic mitochondrial DNA depletion syndrome. The disease, which causes brain damage and an inability to move the limbs, has no known cure.

In March the European Court of Human Rights rejected the parents’ plea to keep their child alive.

Lawyers for Alfie’s parents, Tom Evans and Kate James, will ask the court at a hearing on Monday to overturn previous court decisions allowing the hospital to cut off the child’s life support.

According to a report in the Guardian, an appeals court judge has decided that Alfie will continue to receive treatment pending Monday’s court hearing.

The parents had lost a legal battle to move their son to another hospital in Britain where he would have received treatment. The Vatican’s Bambio Gesù children’s hospital in Rome had also offered to continue Alfie’s treatment.

“It is my sincere hope that everything necessary may be done in order to continue compassionately accompanying little Alfie Evans, and that the deep suffering of his parents may be heard. I am praying for Alfie, for his family and for all who are involved.”

After Alfie’s father delivered an emotional appeal on Facebook to keep his son alive, hundreds of demonstrators gathered outside the Liverpool hospital to protest the decision to turn off Alfie’s life support.

Andrea Williams, of the the Christian Legal Centre, said of Alfie’s parents:

“Thomas and Kate never leave Alfie’s side. They witness to his increasing responsiveness. The state cannot override their desire to seek further treatment for their son, especially when such help is being offered by three different hospitals. The state must not pass and enforce a death sentence.”