A unique case of Benedict XVI defeating the devil 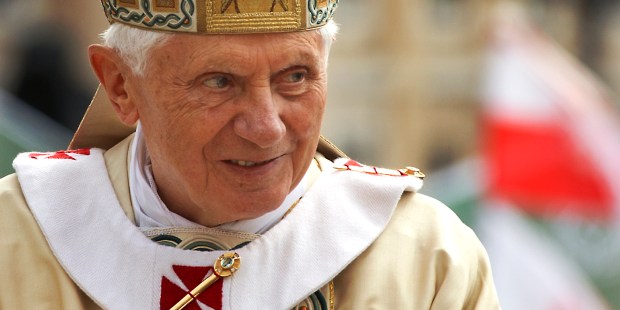 Anecdote from the book ‘Exorcist by Profession,’ the testimony of a disciple of Fr. Gabriele Amorth.

According to a Mexican priest who was an assistant to Roman exorcist Fr. Gabriele Amorth for four years, you never forget your first case of authentic possession. The first one he saw was that of Charles, a French nobleman, who began to feel bad after a spiritual retreat in Dijon, in Burgundy (France). He would go into trances inexplicably, and nothing and nobody could free him.

In the book Exorcist by Profession (Professione esorcista in Italian), authors Fr. Cesare Truqui and Chiara Santomiero, a journalist specializing in the Vatican, explain how an exorcist establishes a dialogue with the presumed victim of the evil one. Once the case is proven to be real—excluding the possibility that it is a strictly psychiatric or medical problem—the exorcist obliges the devil to reveal himself through prayer and questions.

Such was the case of Charles—a tall man (6’3″), happily married, father of one child, whom Benedict XVI freed from the devil just with the power of prayer. The voice that came from the body of the possessed man identified itself: “I am the prince of the world.” Arrogant and haughty in the face of experienced exorcist Francesco Bamonte, it declared, “You are no match for me!” “Who, then?” the exorcist asked; “The pope or a bishop,” the infernal voice replied.

Charles was a normal, successful man, from a wealthy family and noble heritage. The morning of the spiritual retreat, he assaulted with unusual strength someone who was on the retreat with him who had approached him, concerned by his reaction to the prayer. He went through endless appointments with psychiatrists, specialists, and priests. No one could explain his situation, and it was driving him and his family crazy.

Fr. Bamonte felt that he was losing the spiritual battle with Satan on the battleground of Charles’ suffering body, so he consulted Fr. Gabriel Amorth, who encouraged him not to let himself be fooled or frightened. Yet, Satan insisted that only the pope could force him out of Charles’ body.

Charles’ situation got worse. Consequently, they counseled him to write directly to Pope Benedict XVI. The letter made it to the pope by means of a trusted priest, through the Secretariat of State. The answer arrived a week later, signed by the secretary of Pope Ratzinger, promising that the pope would pray for the possessed man.

Benedict XVI offered Masses for the intention of the man’s liberation. Truqui tells that three months later he received a call from Fr. Bamonte: “Father, you’re not going to believe me, but I think that Charles has been liberated!” During the last exorcism, Charles gave a shout of freedom and got up, happy.

The only explanation, according to Truqui, is the powerful prayer of the pope, which forced Satan to his knees. It turns out that Charles’ parents, unknown to him, had made a diabolic pact and offered him, as a child, as tribute in exchange for power and money, together with his twin brother, who was stillborn.

Truqui, who today is a professor during the annual course on exorcism and prayer of liberation organized by the Pontifical Athenaeum Regina Apostolorum in Rome (taking place for the 13th time this April 16-21), recounts that he was not frightened by that first contact with a possession; rather, it was enlightening for him to be able to recognize the reality of the spiritual evil described in the Gospel.

A similar episode, also involving Pope Benedict XVI, took place in May 2009, and was described by Fr. Gabriel Amorth himself in the book The Last Exorcist (L’Ultimo exorcista in Italian).

On this occasion, the German pope, who will turn 91 on April 16, helped cure two possessed young men, Marco and Giovanni, who were taken to St. Peter’s Square because they seemed not to improve despite the prayers and rite of exorcism. During the general audience that Wednesday, when the popemobile drew near them, they began to have convulsions and to have a strange look in their eyes.

Earlier, one of Fr. Amorth’s two assistants who were accompanying the young men had asked Giovanni how he was. “I’m not Giovanni,” growled a gravelly voice. The assistant didn’t respond, knowing “that only an exorcist can talk with the devil,” Amorth says in the book.

Read more:
Pope: Do not dialogue with Satan!

The pope got out of the jeep and greeted the crowd. The possessed young men shook and drooled. One of the women who were helping shouted, “Your Holiness, Your Holiness, we’re here!” The pope turned toward them, observing from a distance; unperturbed, he raised his arm and blessed them. The two possessed men felt a violent shake, and were thrown back three yards, Amorth recounts. The young men began to cry. As the popemobile drove away, both came back to themselves.

In the book he wrote with Santomiero, Truqui explains that the devil is afraid of Jesus and of the Virgin Mary—especially of the mother of Christ—but that Lucifer especially battles on earth against the one true Church founded by Christ.

Bishops are the only ones who can send priests as exorcists to carry out this special ministry. However, for a long time, this practice of liberation has been scorned by science and even by some churches that consider belief in possession to be both superstitious and anachronistic. This has led to a lack of prepared priests in some dioceses of northern Europe and other parts of the world.

According to experts in the field, in order to avoid giving publicity to false cases of possession that seem to support the assertion that possession is really just mental or physical illness, we must remember that true demonic possession rarely happens. Sante Babolin, another recognized exorcist, notes that in the thousands of cases that have been addressed in the Diocese of Padua, Italy, only a few—very few—are authentic possessions. Consequently, this is a problem that must be handled with prudence, expertise, and discretion.

Read more:
The devil will show you the good things of what you’ve left behind, pope warns