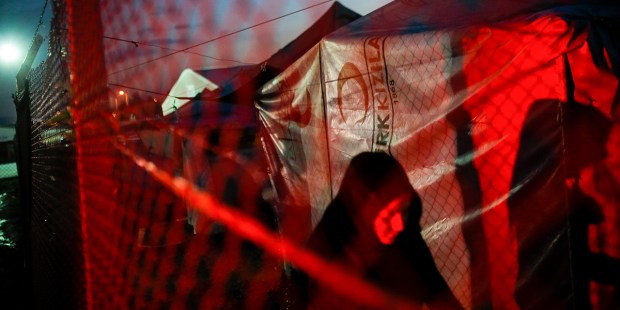 Christians lose, no matter who uses chemical weapons or what the response is, they say

No matter who is responsible for the use of chemical weapons in Syria, and no matter what response there may be from the international community, Christians in the Middle East are resigned to the fact that they will lose out, said two experts on the region speaking at an event sponsored by the Knights of Columbus.

“I really did not expect any chemical gassing by the [Syrian] government because of the first American strike,” said Chaldean Bishop Bawai Soro, a native of Iraq. “Who would dare to do such a thing, and they knew for sure that they would receive what the U.S. government has done last week.”

Bishop Soro, head of the Chaldean Catholic Eparchy of Toronto, Canada, was referring to a U.S. airstrike last year against a Syrian airfield in response to a chemical weapons attack allegedly carried out by the military under Syrian President Bashar al-Assad in the town of Khan Shaykhun. The April 4, 2017, U.S. strike was aimed at the airfield from which the chemical weapons were allegedly launched.

Last Friday night, American, French and British forces launched a strike on chemical weapons facilities in Damascus in response to the latest use of chemical weapons in Syria. An attack against rebels in the city of Douma April 7 reportedly killed at least 70 people, including many civlians. The rebels surrendered the city, one of a few that were still not under the control of the Assad government seven years after the beginning of the civil war in Syria. The Assad government has denied using chemical weapons in Douma.

“So there are really rumors that it was not the Syrian government [that used chemical weapons], but the French say they have the proof that it was,” Bishop Soro said. “Who knows? Those people who know can answer this question. For us, we are a community that, no matter how it goes, we know that we will suffer.”

That sentiment was echoed by a fellow panelist at the event, which was held at St. Mary’s Church in New Haven, Connecticut, and meant to kick off a new fund-raising and awareness-raising campaign for the plight of Christians in the Middle East.

“The reality is that when people ask Christians what they think about it, our response generally is, ‘Why do you ask us? We lose, whether it’s this way or that way, we just lose,” said Stephen M. Rasche, general counsel for the Archdiocese of Erbil in Iraqi Kurdistan. “We don’t make the decisions. Nobody talks to us, nobody cares about us.”

Rasche pointed out that there is “no violence that’s happening in the Middle East that’s being initiated by the Christians. The one thing you can be sure of is that they’re on the receiving end of it—everywhere. It’s just a human tragedy.”

Bisho Soro added, “We don’t know what is going on. We are not consulted, we are only bombed. We’re not even warned. We are deprived, we are raided, we are destroyed.

But that has been the Church’s experience for most of the past 14 centuries, he said.

“As Christians, when we are asked for our opinion, the first thing this comes to mind is, ‘Look, I have nothing to do with that bombing, I had nothing to do with that conflict, because by nature we are pacifist people,” said Bishop Soro, who is from Kirkuk. “By nature we are people oriented to serve others. We have tolerated, we have exercised tremendous amounts of patience, in fact, for 14 centuries. This is what we are seeing from the early 2000s. This is what our culture is, this is the memory of generations and generations of Assyrians, or Chaldeans, of Syriac people. Our hymnology, our stories, our whole culture is based on a hope that ‘God, please save us from these evil times.'”

Rasche, director and legal counsel of the Nineveh Reconstruction Committee, which is rebuilding homes for thousands of Iraqi Christians displaced by the Islamic State group over the past few years, hinted that Christians in Syria may feel similar to their counterparts to the East in regards to who is running the country.

“To put it in the context of the Iraqi experience, the common way of looking at things in Iraq now from the standpoint of the Christians is: ‘Saddam was an evil tyrant, and compared to the horrors that came after, his was a golden time. You can imagine the tortured reality that people live under in order to say such a thing,” Rasche said.

The comments of the two speakers were somewhat more tempered than some Christians in Syria in the wake of Friday night’s coalition attack on Syria. In an April 14 statement, Greek Orthodox Patriarch John X of Antioch and all the East, Syrian Orthodox Patriarch Ignatius Aphrem II of Antioch and all the East, and Melkite-Greek Catholic Patriarch Joseph Absi of Antioch, Alexandria, and Jerusalem, condemned the “brutal aggression that took place this morning against our precious country Syria by the USA, France and the UK, under the allegations that the Syrian government has used chemical weapons.” The patriarchs charged that the military action was a violation of international laws and the UN Charter, “because it is an unjustified assault on a sovereign country.”

“The allegations of the USA and other countries that the Syrian army is using chemical weapons and that Syria is a country that owns and uses this kind of weapon, is a claim that is unjustified and unsupported by sufficient and clear evidence,” they said. “This brutal aggression destroys the chances for a peaceful political solution and leads to escalation and more complications. This unjust aggression encourages the terrorist organizations and gives them momentum to continue in their terrorism.”

The statement clearly supported Assad’s efforts in the civil war, expressing the patriarchs’ confidence that the Syrian army will “continue to fight courageously against terrorism until every inch of the Syrian land is cleansed from terrorism.”

Chaldean Catholic Bishop Antoine Audo of Aleppo, Syria, charged that the U.S. and Russia are “using Syria to wage a war against one another.” Speaking with Italian TV Tg2000, he said that the U.S., French and British military action proved that the international community is trying to do in Syria what they did in Iraq, “when they destroyed that country saying that there were chemical weapons.”

Sunday’s panel discussion in New Haven, however, focused more heavily on the need for the trifold response of prayer, alms and engaging elected officials. The event included a Mass to pray for peace, reconciliation and forgiveness in the Middle East. Archbishop Leonard P. Blair of Hartford, Connecticut, was the main celebrant, and Bishop Soro gave a homily after chanting the Gospel in Aramaic.

The Knights, who have raised about $19 million to support embattled Christians in the Middle East since 2014, hopes to see dioceses in the U.S. emulate a campaign that has been underway in the Archdiocese of Hartford. All nine high schools in the archdiocese have made efforts to familiarize students with the genocide of Christians in the Middle East and have each adopted a “Sister Town” in the region to keep in their prayers. The Knights has provided each school with “solidarity crosses” made in the Middle East that students have sold for $10 donations. All proceeds from the sale of the olive wood crosses were presented at the Mass and sent to the “Sister Towns” to help in rebuilding efforts.

The Knights have committed $2 million to the rebuilding of the predominantly Christian town of Karamles on the Nineveh Plain. Karamles had been overrun by ISIS, which destroyed homes, and desecrated churches before it was liberated last year.