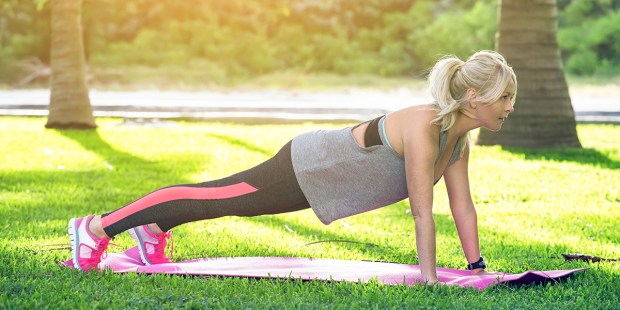 It’s as effective as cardio, if not more so — but Tabata training is not for the faint of heart.

After my fourth baby was born, I tried really hard to get in shape. I used fitness videos and worked out at home for 45 minutes to an hour each day, doing both cardio and strength training. I would end the workouts sweaty and breathing hard, convinced I had pushed myself to my limits. And while I did lose weight, it wasn’t as much as I needed to lose — and not nearly as much as I wanted to lose.

Fast-forward three years, to a few months after my fifth baby was born. I knew I needed to get back to exercising, but the thought of doing fitness videos in my living room was unbearable. I didn’t want to work out alone, step-touching and reverse lunging to the dulcet sounds of my baby screaming and my toddler begging for cereal. Instead, I decided that I would go for broke and sign the whole family up for taekwondo.

I’ve written about it a lot, I know, but what I might not have mentioned is how I felt during that first kickboxing class.

I thought I knew how to work out hard. I thought I knew how to push myself to my limits. But y’all — I knew nothing. That class put me into a cardio zone I didn’t even know existed, where all rational thought more or less stopped and I was totally and completely focused on continuing to move until we were given a break. I felt a little faint a few times and close to throwing up, and left a literal puddle of sweat on the mats. I was drenched, breathless, totally depleted — and on the greatest cardio high I’d ever felt.

That was my first experience with Tabata-style training, a name I’d heard and thought I understood until I’d actually experienced it. It’s no surprise to me now that Tabata training is significantly more effective than anything else, and also no surprise why it’s not widely attempted. It’s named after Dr. Izumi Tabata, the Japanese doctor whose 1996 research aimed to discover, for once and for all, which type of exercise was most effective: sustained cardio or short bursts of maximal effort.

After a period of six weeks, during which the participants performed their assigned exercises five days per week, the researchers discovered that the intervals group received the same aerobic benefits from just four minutes as the moderate intensity group did in an hour.

A later study found that a typical Tabata routine has the potential to burn approximately 13.5 calories per minute and can double an individuals’ metabolic rate for half an hour after the workout has been completed, torching even more calories — an effect known as “afterburn.” In terms of efficiency, the Tabata protocol can’t be beaten.

Anyone who’s ever been in a fight can tell you that fighting is the most intense exercise there is. There’s a reason why boxers and martial artists train so hard for fights that don’t seem to last all that long. In a fight, you give 100 percent effort through a combination of will, adrenaline, and fight-or-flight response.

Tabata training is very similar, even if you’re doing burpees and mountain climbers instead of uppercuts and switch kicks. For it to work, you have to push yourself beyond the point where you think you can’t continue. That takes a lot of grit, and can be emotionally difficult. It was for me in the beginning — some nights I would come home from class and cry, because the effort of pushing my body further than I ever had before took an emotional investment. I had to believe I was capable of more than I knew, and then I had to make that belief come true. Sometimes I didn’t get there. Sometimes I did, but laying everything on the line like that still left me feeling vulnerable.

Read more:
What kind of workout helps your brain the most?