30,000 British Catholics form a living Rosary on the Coast

See photos from the event that became the largest gathering of UK Catholics since Pope Benedict XVI's 2010 visit.

This weekend’s Rosary on the Coast in the UK saw thousands of Catholic faithful flock to the shores of the British Isles in over 400 locations. These prayer groups ranged from single families to crowds of hundreds, all praying the Holy Rosary at once.

The event was estimated to have drawn over 30,000 people, which makes it the largest Catholic gathering since Pope Benedict visited the UK, in 2010, which brought together over 65,000. 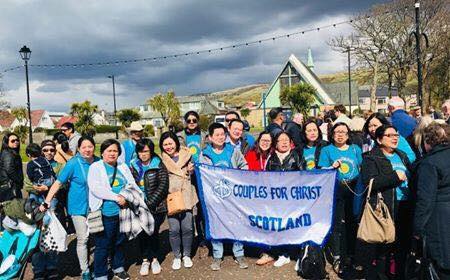 At the group in Exmouth, attendee Donna Cooper was particularly impressed by the number of young people who joined the event. She told the Herald:

“If the youth of today are the hope for the Church’s future, the turnout at Exmouth beach for Rosary on the Coast was very encouraging. The priests and people of Exeter parishes were joined by an enthusiastic group of Confirmation candidates who are due to receive the Sacrament next weekend.” “We certainly made an impression on the slightly perplexed Sunday afternoon dog walkers, particularly when we concluded our time of prayer with a heartfelt rendition of Faith of our Fathers,” she added.

On the Isle of Eriskay in the Outer Hebrides, Fr. Ross Crichton led the group to pray in both English and Gaelic. He described the afternoon prayer in one word: “Glorious.”

“As soon as we began the ancient prayer of the rosary there was a real spirit of a community with everybody raising their minds and hearts to God in Prayer,” he said. “I personally was able to see the glorious mysteries with new meaning as we looked across the Solent towards the Isle of Wright. Even though the weather was cloudy with a very cold breeze we identified easily with all the other people gathered around the coast of Great Britain.”

The Catholic Herald also reports that there was a prayer group joining the UK from Catalonia, Spain. The Rev. Deacon Bernard Farrell-Roberts said that he, his wife and a Scottish priest prayed for Britain from the Mediterranean coast.

Images shared via Facebook by Rosary on the Coast