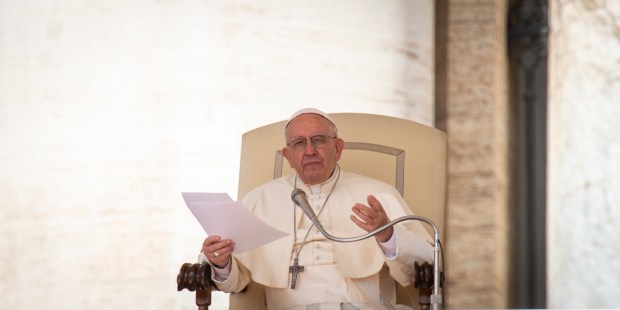 Francis talks about those supposedly clever people who, despite their behavior, seem to come out on top in every situation

Pope Francis spoke about baptism as the source of new life during the traditional general audience this Wednesday in Saint Peter’s Square. “You cannot follow Christ with conditions; rather, you have to strip yourself of all evil in order to start a new life in Christ,” he said.

While the devil creates division, God unites individuals into one people, he said. “To the extent that I say ‘no’ to the suggestions of the devil—the one who divides—I can say ‘yes’ to God, who calls me to conform myself to Him in my thoughts and works.”

Looking at the people gathered before him, the Latin American pope reflected on those who, despite their bad behavior, seem to always come out on top.

“This is why the rejection [of the devil] and the profession of faith go together. We must burn our bridges, leaving them behind us, to undertake the new Way which is Christ,” he said.

“I reject” and “I believe” are the foundations of baptism, the pope said in the context of his catechesis on the rites of the sacrament carried out next to the baptismal font, which are the blessing of the water, the rejection of sin, and the profession of faith.

Consequently, “the questions, ‘Do you reject Satan, and all his works, and all his empty promises?’ are answered in the first person singular: ‘I do.’ In the same way, we profess the faith of the Church, saying, ‘I do [believe].'”

“This indicates,” he continues, “that it is a personal, responsible choice, which must be translated into concrete gestures of trust in God.”

This act “is not reduced to just the moment of baptism; rather, it must accompany all growth and maturation of the Christian life,” he said.

The blessing of the water

Earlier, he explained that “water is an element that is characterized by its capacity to give life and to purify.”

In the previous audience, he had already suggested that faithful Catholics should keep holy water at the entrance to their houses so they can bless themselves upon entering or leaving their homes, and thus remember their commitment to abandon sin and evil through baptism.

Read more:
Priest: Why holy water comes with me whenever I travel

“Water,” he continued, is a “universally recognized natural symbolism” that appears in various passages of the Word of God, but the power to cleanse and give life on a spiritual level comes not from the water as such, but from the Holy Spirit. This is why “the Church invokes the action of the Holy Spirit ‘so that those who receive Baptism in it may be buried in death with Christ and rise again with Him to eternal life.'”

The profession of faith

“Once the water has been blessed, it is necessary to prepare your heart to receive baptism; that is why we reject Satan and profess the faith. These two acts are closely united,” he explained.

Lastly he greeted the faithful, including the pilgrims present at the audience. He invited them to remember their baptism gratefully, and to “renew, with joy and conviction, the commitment that they sealed on that day, so that they may always live submerged in the love of God the Father, Son, and Holy Spirit.”

This morning at the Vatican, Pope Francis blessed a bus with which young people from Poland and from the local Caritas are promoting a campaign of assistance for the victims—especially children—of persecution in Syria.

In addition, the initiative seeks to promote volunteerism among youth. “The sign of the spiritual side of the project… will be a pilgrimage of the image of Our Lady of Aleppo,” the pope said. Yesterday, he inaugurated the Marian month of May at the shrine of the Divine Mercy, in Rome. There, he recited the Rosary, praying for peace for Syria and the Middle East.