Man conceived in rape thanks his mother for not aborting him 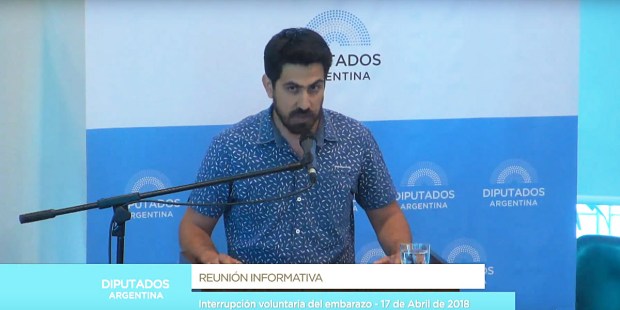 “The question we should ask ourselves is not when does life begin, but how much is a life worth.”

Christian could have been absent from the debate, and his voice could have been silent. But his mother, who gave birth to him at a very, very young age, continued on with her pregnancy and chose adoption for her son.

Christian always knew he’d been adopted, he told the Argentinian Congress recently, speaking during a discussion about legalizing abortion. As he grew older, he felt the need to find and know his biological mother.

At 15, he found an envelope with information about his adoption, and for the first time he learned the name of his birth mother. Hid adoptive parents had never hid it from him; he had just never asked. It wasn’t easy to look for her back then; there was no social media, and he was far away from Buenos Aires, where she lived.

Many years later, after he was married, he searched for her again, and this time, he was successful. He learned that his mother had come to Buenos Aires at the age 12 to work, but as a young girl, she suffered countless assaults. It was more than 20 years since the two of them had been together in the hospital, before his adoption. They talked on the phone and agreed to meet at a shopping mall. During the first minutes, it was silent, until he said: “I want you to know that I looked for you to tell you thank you, because you didn’t abort me.” His mother burst into tears. And she told him: “I’ve been thinking about you every day of my life.”

He went on to tell the Argentine Congress: “I want to tell you that regardless of whether she had given me life or had chosen to abort me, nothing would have changed — she would always have been thinking about that baby every day of her life. That’s why a mother who aborts can never stop thinking about that baby. She can never stop thinking about that little person that was forming inside her. I know there are pregnancies that come about through forced sex, by rape, and other [ways]… I’m not trying to put myself into the shoes of these future mothers. I will never be able to know the pain, sadness, and emptiness that those situations cause. But I do know what it means to enjoy life, to be able to help someone else, to give hope or a hug to someone who has never felt it, knowing that my mother had the right — as they say — to abort me or let me live,” Christian said.

“The question we should ask ourselves today is not when does life begin, but rather how much is a life worth. Let’s all allow other babies to be born, as I was able to be born, because otherwise I would have been another aborted baby. I want to tell you that a story that begins with such sadness, pain, and injustice can — in the hands of a God of perfect love — become a good story worth telling.”

Christian was one of 16 people who spoke in favor of life during a public hearing on legalizing abortion in Argentina. Unfortunately, few congressmen actually attend the sessions, but Christian’s message is still one of great hope.

Read more:
I Was Raped While on a Business Trip, and My Husband and I Chose Life