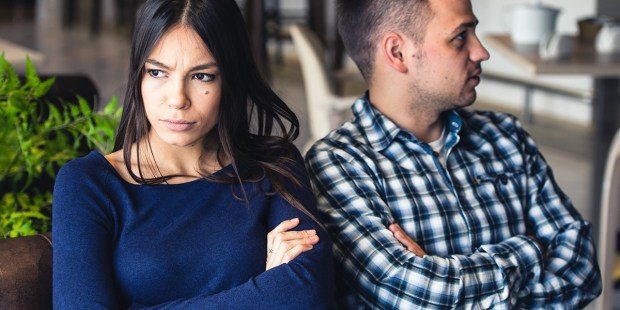 Here are 10 ways to resolve marriage problems, big and small.

“I have known many happy marriages, but never a compatible one. The whole aim of marriage is to fight through and survive the instant when incompatibility becomes unquestionable. For a man and a woman, as such, are incompatible.” – GK Chesterton in What’s Wrong With the World

I receive tons of marriage jokes on Whatsapp, many of them from women themselves. Most of them are skewed heavily in favor of the husband. One says, “I had some words with my wife, and she had some paragraphs with me.”

Jokes aside, marital conflicts are a serious reality that must be justly dealt with. From simple disagreements to full-blown conflicts, every married couple has arguments. Don’t get fooled by the Facebook and Instagram “perfect couples” you see; people are not going to post negative aspects of their life online. Some couples claim they’ve never had a difference of opinion during their entire married life. Is that really possible? It’s hard to believe that God ever made two people so alike in every way that their opinions coincided in everything!

However, the point is that no matter how small the disagreement is, it must be resolved. Big fights must obviously be resolved before they get out of hand, and even the little disagreements, if not tackled, can fester for years under the surface, and one day blow out like a volcano. Some fights never end, they just go on for years, while others seem to die out without reaching a conclusion, thus deepening the underlying resentment. The first shock usually comes a few weeks or months after marriage, when we realize that our “perfect” spouse is not all that perfect, and we begin to get irritated by little “hiccups” in their personality. This is perfectly normal and must be worked through.

Remember that conflict can be good

Don’t avoid fights. Disagreements are a healthy part of relationships and every couple has them. What is more important is how you fight. When there is a fight, go through it, but don’t let it destroy your love for each other. Fight fair but always keeping in mind that your spouse is not your enemy, but loves you tremendously. Working out your disagreements will make you a stronger couple.

Don’t give the “silent treatment”

When there is a fight, it’s important to communicate and talk about it. Refusing to talk to the other person is only going to make it worse. Of course, at the start, you can be silent to show that you are mad, but don’t prolong that silence for too long. When your partner comes to you after some time and says he/she wants to talk about it, don’t refuse. Always agree beforehand that no matter what you’ll will not go to bed angry that night. “Do not let the sun go down on your anger.” Refusing to make up before going to bed will make you think about it more and dig up even more issues. You’re not going to be happy the next morning. However, this is easier said than done.

Remind yourself “I’m not perfect”

Many conflicts arise when one partner in the marriage considers himself/herself beyond reproach and constantly blames the other person for all that is going wrong. No husband and no wife is perfect. Being aware that we both are not perfect will help you work towards a solution. Marriage is about being flexible and making space for your spouse’s personality. At the heart of every conflict is the self, the ego. We may blame our fights on our circumstances and on the other person, but the true problem is that even within marriage, I want my unrestrained freedom to do as I please, expecting at the same time, my spouse’s unconditional approval. In other words, I want to be the sun with my spouse orbiting around me as a devoted planet. Remember, that even in cases like infidelity (where one partner is clearly at fault), it would be well to reflect if I have been wanting in my commitment to my spouse. It always takes two hands to clap.

Ask a friend to mediate

In cases where the issue becomes serious, agree to ask a common friend (a person that you both trust to be objective and neutral) to mediate between you both. It could be a trustfed family friend, a family member or even a priest. There may be times when going together for marriage counseling is maybe unavoidable. Don’t refuse to go even if you think that the other is at fault. The purpose of mediation is to help you both sort out your problems, not to establish whose fault it was. Remember that at the end, you love your spouse, you want to stay married and the other person probably feels the same way about you.

Don’t say hurtful things when you are angry that may permanently drive a wedge between you and your spouse. Don’t threaten divorce, or moving out of the house or whatever else. Make an agreement to not even bring up that word in your marriage no matter how bad the argument or situation is (assuming there is no abuse or infidelity). When you are feeling downright mad, just back away for some time, and give your mind and heart time to let off the steam.

Don’t bring up the past

Though history wasn’t our favorite subject in school, it becomes so in a marriage. Keep your conversation fixed to the current problem. Don’t try to bring out all other instances when you’ve been unhappy with your spouse. Many things in the past are just that, history, and nothing can be done about it. Keeping a checklist of past mistakes doesn’t help your relationship. You can either stay forever unhappy in the past or you can decide to be happy in the future.

If one of the spouses is consuming pornography, it can pose a serious threat to their relationship. Pornography separates sex from love and creates an emotional distance between husband and wife. Greater consumption of pornography can lead to decreased intimacy in marriage and less sexual satisfaction, even to the point of impotence. It can be a stepping stone to having an affair. Not to mention that the other partner will probably view this as emotional infidelity. Watching pornography will never substitute for intimacy between husband and wife, and will in fact destroy it. Hence, press the delete button and install softwares on your laptop to help prevent you from accessing pornographic material.

When you know you have made a mistake or that you have done better, don’t let pride come in the way of saying “I’m sorry.” Although those words can be hard to get out sometimes, quite often the most loving words in a marriage aren’t “I love you,” but “I’m sorry.” Having the humility to admit you were wrong and ask for forgiveness breaks down barriers between you and your spouse and helps to rebuild your relationship. Some think that saying sorry is a sign of weakness. Some people are afraid that they will lose face with the ones they love if they admit their faults. But the very opposite is true; by being honest about themselves, they will actually gain more respect than they ever had before.

In extreme case where there is emotional or physical abuse, or continuous infidelity, it’s not wrong to take some time out and separate yourself from your spouse for a period of time. In fact, it’s probably the right thing to do. Quite often, the erring spouse only comes to a deep realization of his/her faults when the other has left home. However, this step must be taken with extreme prudence and involving others in the picture. It’s usually a last resort and not one to be taken alone. Also don’t think “divorce” immediately. Many conflicts are healed with time. Separation, not divorce, is the best step in these circumstances.

Love is not a feeling, its a decision. On some days you have to decide to love each other when the other person is being difficult. Being together is a project that begins on your wedding day. It doesn’t end with just having found your soul mate. Most often, after marriage, you have to become the right person for your spouse. You have to work on yourself rather than trying to change the other. But this has to be done by both, jointly, with God’s grace and through prayer.

“I often think of the wedding feast of Cana. The first wine is very fine: This is falling in love. But it does not last until the end: A second wine has to come later, it has to ferment and grow, to mature. The definitive love that can truly become this ‘second wine’ is more wonderful still; it is better than the first wine. And this is what we must seek.” — Pope Benedict XVI