Chile’s 34 bishops resign, placing their future in the pope’s hands 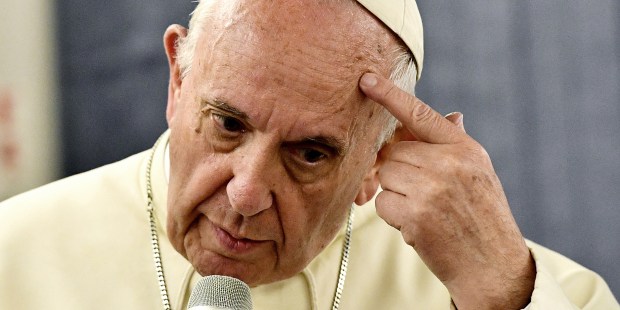 Vincenzo PINTO I AFP
Pope Francis answers journalists during a press conference on board of the plane on January 22, 2018, during his flyback of a seven days trip to Chile and Peru. / AFP PHOTO / Vincenzo PINTO
Share
Print
Ary Waldir Ramos Diaz - published on 05/18/18

Francis will have to decide how many, if any, of the resignations he accepts

“We thank the victims for their perseverance and courage,” say the bishops of Chile in a joint declaration after their meeting with the pope at the Vatican.

“We, all of the bishops [of Chile] present in Rome, have put our posts in the hands of the Holy Father and will leave it to him to decide freely about each of us,” said the Chilean bishops who met with the pope in Rome from May 14 to 17, for a time of consultation, prayer and discussion regarding the path forward after the sexual abuse, and abuses of power and conscience, perpetrated by clergy against children and young people.

The press release was made public today in Rome by the two spokesmen of the 31 active and three emeritus bishops: Bishop Juan Ignacio González, of San Bernardo, and Bishop Fernando Ramos, who is the auxiliary bishop of Santiago and the Secretary of the Episcopal Conference of Chile.

They explained that they had spent three days of “meetings and many hours dedicated to meditation and prayer,” following the indications of Pope Francis.

Last night, a harshly critical document, which the pope had prepared before the meeting, was leaked.

“We want to ask the victims, the pope, the People of God, and the country, for forgiveness for the pain caused by our grave errors and omissions,” say the bishops in the press release read in the Pio X Hall in Vatican City by Bishop Fernando Ramos.

Besides thanking the pope for listening attentively and paternally, they also thanked Bishop Charles J. Scicluna (the bishop of Malta) and Fr. Jordi Bertomeu “for their pastoral and personal dedication, as well as for their effort over recent weeks to try to heal the wounds of our country’s Church and society.”

Read more:
Pope says he made mistakes in assessing the situation of abuse in Chile

“We want to thank the victims for their perseverance and their courage, despite the enormous personal, spiritual, social, and family difficulties that they have had to face, many times amidst incomprehension and attacks from the ecclesial community itself,” they said in the statement. “Once again, we beg their forgiveness and their help to continue advancing along the path of healing and cicatrization of the wounds.”

In addition, they announced that “all of the [Chilean] bishops present in Rome” had put their posts in the pope’s hands.

“We are starting on the path, knowing that these days of honest dialogue have been a milestone in a process of profound change, led by Pope Francis. In communion with him, we want to reestablish justice and contribute to the reparation of the damage that has been done, to give a new impulse to the prophetic mission of the Church in Chile, whose center should always be Christ,” they said.

In declarations read to the press by Bishop Fernando Ramos, the bishops confirmed that the pope had read a document to them in which he “expressed his conclusions and reflections regarding Bishop Scicluna’s report on his visit to Chile” in February.

The text clearly indicates a “series of absolutely reprehensible actions that have occurred in the Church in Chile in relation to the unacceptable abuses (…) and which have led to the Church having lost some of the prophetic vigor which had characterized it.”

During this week’s meetings, “each bishop had the opportunity to express his reaction, opinion, and perspective, regarding what the pope had indicated.”

They said they presented “various suggestions for measures to be adopted to confront this great crisis; at the same time, we started to arrive at the idea that, in order to be more in tune with the will of the Holy Father, it was appropriate that we declare our most absolute willingness to put our pastoral positions in the pope’s hands.”

The bishops report that the decision was “collegial and solidary,” to take responsibility—not without sorrow—”for the grave events that have taken place, so that the Holy Father could freely do as he wished with all of us.”

Yesterday, the pope received the bishops’ response. “Thus, in the coming weeks, he will be able to decide whether to accept or reject what we have proposed.”

Until then, they “continue in their pastoral positions and in full exercise of their offices.”