Ever think of the Holy Spirit as your lawyer? If you know a bit about the devil, you should! 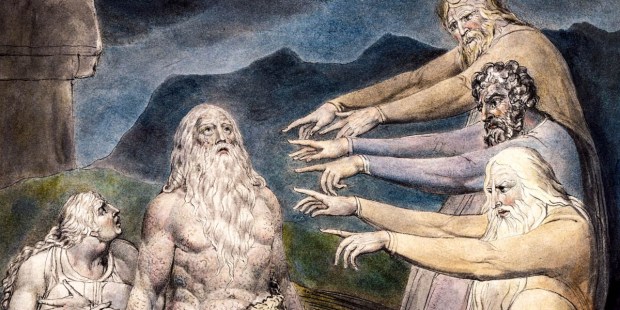 The Greek word Jesus uses to refer to the Spirit is pliable … and rich in meaning.

I had a professor who with lamentation used to call the Holy Spirit “the forgotten Person of the Trinity.” (In fact, he offered bonus points for anyone who mentioned the Spirit in class.)

There’s at least one way in which this is understandable: Whereas we have solid and strong (albeit woefully incomplete) mental images of God the Father (in the figure of the elderly man, the “Ancient of Days” from the Book of Daniel) and actual evidence of what God the Son really looked like as he roamed our earth, a “spirit” is by nature hard to visualize. Sure, Scripture gives us images such as a dove or tongues of fire, but those don’t have quite the same sticking power.

Read more:
This 3D “carbon copy” of Jesus was created using the Shroud of Turin

But Scripture gives us another image for the Spirit. It may seem odd at first, but it can be helpful: the Holy Spirit is our defense attorney.

Where does this notion come from? In John 14:16-17, Jesus says: “And I will ask the Father, and he will give you another Advocate to be with you always, the Spirit of truth, which the world cannot accept, because it neither sees nor knows it. But you know it, because it remains with you, and will be in you.”

That word advocate in Greek is parakleton, which, since Greek is a pliable language, means variously “counselor, comforter, helper, or advocate.” An advocate or counselor is one who speaks on our behalf or who offers us guidance. Though this description itself sounds vaguely like an attorney, the connection is much deeper.

The word Satan means “accuser,” “adversary,” or “one who opposes.” We see Satan playing this role very explicitly in the Book of Job, when Satan claims that Job only worships God because Job is so blessed. Here Satan is very much like a prosecutor, standing before God the just judge and claiming that all of humanity is guilty.

But Jesus purchased for us the rewards of eternal life through his sacrifice on the Cross, redeeming us from sin and death. Christ is eternally interceding for us before the Father; by our Baptism we our incorporated into Christ and participate in His Sonship, becoming ourselves adopted sons and daughters of God; and in every Mass Christ’s sacrifice is re-presented to the Father for the sake of the world. Thus, 1 John 2:1 calls Jesus our “Advocate with the Father.”

But isn’t the Spirit the Advocate? Indeed! Just as in Baptism we are incorporated into Christ through the power of the Spirit, so too both the Son and the Spirit are rightly called Advocate. For the Spirit is “the Spirit of Jesus” (Acts 16:7).

The Son is our Advocate with the Father, interceding for us, and the Spirit is our Advocate as counselor, guiding us into the truth (John 16:13) and testifying that indeed we belong to Christ, as St. Paul puts it so well in his Letter to the Romans:

“The Spirit itself bears witness with our spirit that we are children of God, and if children, then heirs, heirs of God and joint heirs with Christ, if only we suffer with him so that we may also be glorified with him.” (Romans 8:16)

The Holy Spirit comes to us in Baptism, signing and sealing us with the mark of Christ, imprinting us with that indelible mark that shows that we belong to God.

Read more:
Not even the greatest sin can wipe off the mark baptism leaves on our souls

By that action, and His continuous work in our lives as we cooperate with God’s grace, the Spirit testifies, bears witness, demonstrates before the just judge that we are His. The Spirit is our comfort and our counsel and our advocate. He is our defense from the accusations of Satan. He is our parakletos.

Let us be mindful of the work of the Spirit in our lives. We’ll get a lot more than bonus points out of it!