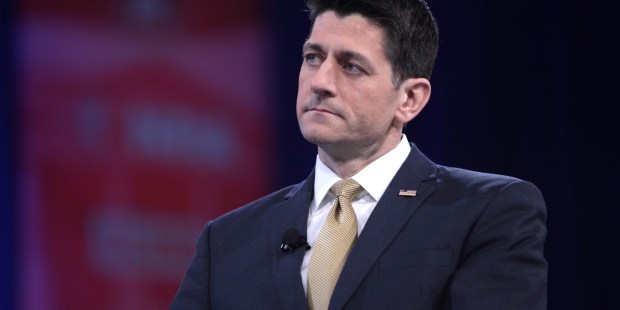 “Let us recommit ourselves to living not just successful lives, but the faithful lives that the grace of God makes possible for all of us,” said the outgoing Republican lawmaker.

Ryan, who last month announced that he would not seek re-election to Congress at the end of his term, invoked Pope Francis, who “called all Catholics to be healers of the walking wounded.”

“Let us recommit ourselves to living not just successful lives, but the faithful lives that the grace of God makes possible for all of us. Let us recapture these beautiful, unifying principles of Catholic social teaching,” he told the crowd of 1,200 Catholics gathered at the Marriott Marquis Hotel.

That social teaching, said Ryan, would serve as an “antidote” to “what ails our culture.”

In his speech he cautioned against applying government solutions to the country’s social problems, and said that Catholic institutions should be allowed the freedom to serve those in need.

“We should all insist that public policy at every level permits Catholic institutions the maximum freedom to serve the poor…the elderly…children yearning for foster families…women in crisis pregnancies…families torn apart by the opioid epidemic: all those who look to the Church for the help they need to live lives of purpose. We should insist on this,” he said.

In a reference to his announcement that he would retire at the end of his term, Ryan promised that he would continue to promote Catholic social doctrine in the next chapter of his life.

“Now I do not know what lies in store for me next. But I promise you this: I am going to continue thinking about, and talking about, these things. Even if it is just as a parishioner in Janesville, Wisconsin at coffee and donuts after Mass, I will be there,” he said.

The annual event, which was first held in 2004, began and ended in prayer, and included a recitation of the Divine Mercy Chaplet by Fr. Paul Scalia, the son of the late Justice Antonin Scalia. In his closing prayer, Msgr. John Cregan of the Diocese of Arlington, Va., called on the assembled to pray for Ireland, which will hold a referendum on abortion on Friday, May 25.

The newly appointed Ambassador at Large for International Freedom, Sam Brownback, also addressed the gathering, calling religious freedom a “God-given right,” and said that “no government has a right to infringe a God-given right.”

In the keynote address, Archbishop Joseph Naumann of Kansas City lamented the “crisis of faith” in our “hedonistic” and “utilitarian” culture. He said Catholics are called to share their love and knowledge of Jesus Christ with the world.

“For those of us who have encountered the Risen Jesus, we have a responsibility to bring His love and mercy to others, especially as Pope Francis so often reminds us, to those on the peripheries,” he said.

“We are called to be missionary disciples, communicating the love of Jesus to others and bringing others to encounter the Risen Lord,” said Naumann.

“We are called to renew our nation, not primarily by enacting laws, but by announcing the joy and hope of the Gospel of Jesus to individuals in desperate need of its good news,” he said, concluding, “It is our task to reclaim our culture, one mind, one heart, one soul at a time.”