Why “visiting” Jesus is a great Catholic tradition 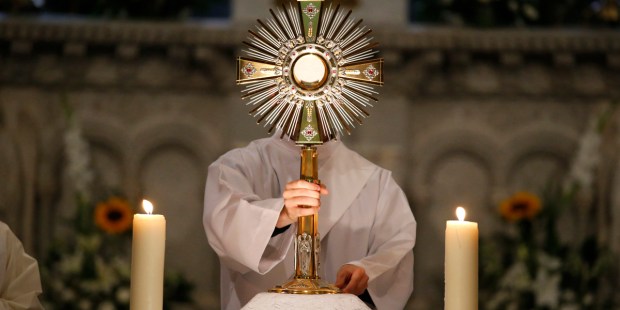 We don’t need to say much — just rejoicing that he’s there, really there … that is the best prayer.

Growing up and going to Catholic school, we had religion class every day. One thing we all learned about was the “Real Presence.”  There was no doubt in our minds that inside the church, Jesus was truly present “body and blood, soul and divinity.” He was inside the tabernacle, and He was waiting for us to “visit” Him. The phrase, “I’m going to pay a visit,” needed no explanation.

The practice of visiting Jesus in the tabernacle is linked to various related devotions and practices.

First and above all, it is a manifestation of our faith in the Real Presence.

In the very early times of the Church, before there were physical churches, the Blessed Sacrament was reserved after Mass for the purpose of bringing Communion to the faithful who couldn’t attend the celebration. (As an extraordinary minister of Holy Communion, in a way I continue this practice today, though I go straight to the distribution of Communion following Mass, and don’t keep the Eucharist in my home.)

After Emperor Constantine stopped the persecution of Christians in 313, construction of churches began in earnest. It was during this time that the Holy Eucharist began to be kept in the churches for distribution to the sick.

Over the next several centuries, the use of tabernacles solidified, and from this, it was natural that the practice of spending time with Jesus in the tabernacle would evolve.

In the Middle Ages, Adoration began to take hold. Adoration refers to spending time with the Eucharist, with the Host visible in a special type of display case called a monstrance (from the Latin word for “show forth”).

Read more:
What is a monstrance?

Related to the practice of adoration is the special blessing given with the exposed Host, known as Benediction. The priest or deacon wears a humeral veil, and holding the monstrance, blesses the faithful with the Sign of the Cross.

Read more: What’s the point of the humeral veil, anyway?

By the 1600s, detailed instructions for Benediction were put in place by the Church.

As well, we have the feast of Corpus Christi, celebrated today in many dioceses.

In 1264, Pope Urban IV ordered that the Feast of Corpus Christi be enacted throughout the universal church. Pope Urban passed away before it was implemented, so it was not until 1317 that Pope John XXII added it to the Church calendar. Corpus Christi processions followed.

All of these devotions and practices are, as we said at the beginning, a natural expression of our faith that the Eucharist is Jesus, and that within the tabernacle, we find His Real Presence.

If that is what we believe, then it is natural that we should want to pop in to visit with Him now and again … in fact, as often as possible.

A visit to the Blessed Sacrament — a visit to Jesus — need not be lengthy or complicated. Benedict XVI spoke of it in his letter announcing the 2009-2010 Year for Priests, on the 150th anniversary of the birth of the patron of priests, St. John Vianney:

Saint John Mary Vianney taught his parishioners primarily by the witness of his life. It was from his example that they learned to pray, halting frequently before the tabernacle for a visit to Jesus in the Blessed Sacrament. “One need not say much to pray well” – the Curé explained to them – “We know that Jesus is there in the tabernacle: let us open our hearts to him, let us rejoice in his sacred presence. That is the best prayer”.

“Contemplation is a gaze of faith, fixed on Jesus. ‘I look at him and he looks at me’: this is what a certain peasant of Ars used to say to his holy Curé about his prayer before the tabernacle” (Catechism of the Catholic Church, No. 2715).