Pedro Calungsod: A 17-year-old Filipino catechist who was killed for his faith 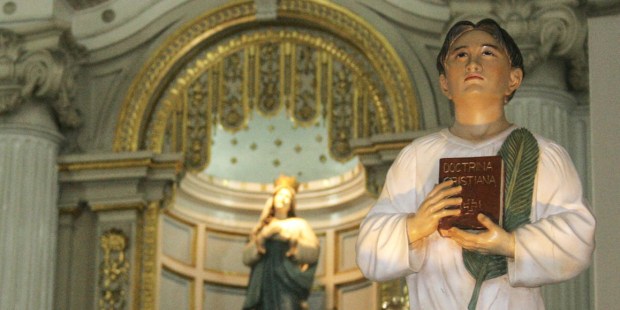 Calungsod bravely set out as a young missionary in Guam and converted many to Christianity.

Born in the Visayan Islands of the Philippines during the 17th century, Pedro Calungsod eventually traveled to Guam, where his zeal for the Christian faith was put to good use. He was willing to do anything to serve Christ and his Church, even if it meant giving up his life.

Initially Calungsod volunteered to help the Jesuit missionaries there and to become a catechist. It was a difficult life in Guam as the territory was not easy to navigate and the native people were not always receptive to the word of God.

One day a Chinese immigrant began spreading rumors about the missionaries. He claimed that the water used for baptism was poisonous. This was based on the reality that many of the infants who were baptized were in danger of death. It appeared to some of the people that every time a missionary baptized a baby, that child would die.

These rumors created an intense persecution, but it didn’t dissuade Calungsod and a priest he was assisting. They even offered baptism to a child of a father who left the Christian faith and greatly despised the missionaries. The child’s mother consented to the baptism and when the child’s father learned what happened, he was furious. He started throwing spears at Calungsod and the priest, eventually killing both of them. It is believed that Calungsod could have easily escaped, but decided to remain at the priest’s side.

They were seen as great martyrs for the faith and at Calungsod’s beatification St. John Paul II praised his heroism, raising him up as an example for all young people.

From his childhood, Pedro Calungsod declared himself unwaveringly for Christ and responded generously to his call. Young people today can draw encouragement and strength from the example of Pedro, whose love of Jesus inspired him to devote his teenage years to teaching the faith as a lay catechist. Leaving family and friends behind, Pedro willingly accepted the challenge put to him by Fr. Diego de San Vitores to join him on the Mission to the Chamorros. In a spirit of faith, marked by strong Eucharistic and Marian devotion, Pedro undertook the demanding work asked of him and bravely faced the many obstacles and difficulties he met. In the face of imminent danger, Pedro would not forsake Fr. Diego, but as a “good soldier of Christ” preferred to die at the missionary’s side. Today Bl. Pedro Calungsod intercedes for the young, in particular those of his native Philippines, and he challenges them. Young friends, do not hesitate to follow the example of Pedro, who “pleased God and was loved by him” (Wis 4: 10) and who, having come to perfection in so short a time, lived a full life (cf. ibid., v. 13).

Calungsod is recognized as the patron saint of Filipino youth and a prime example of a catechist who was willing to risk it all to bring the message of Jesus Christ to the world.

Read more:
3 Filipino bishops on the road to canonization