When a girl can’t say no, cue the Superhero Dad 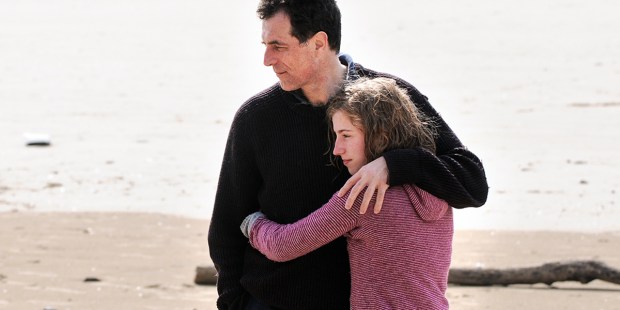 There’s something special about my husband’s fatherly protection of my daughter that I can’t quite replicate in the same way.

Last summer our family enjoyed a fun afternoon at a local beach. My 13-year-old daughter had brought her friend along, and the two girls were having a blast playing in the water. My husband was splashing around with our younger kids and I was trying to convince our toddler to leave the sandy muck and join the fun in the water.

I heard some loud voices and looked up to see my husband forcefully saying “You just stay over there,” to several teenage boys who had approached my daughter and her friend. The boys backed off and I got the rest of the story. The boys had been “chicken-fighting” in the water and wanted to chicken-fight my daughter and her friend. The girls didn’t want to play with them. One of the boys had started taunting them, saying “Come on, polka-dots! Give me your phone number!” (the friend was wearing a polka-dot bathing suit), and the girls were nervously laughing and shaking their heads no. At that point my husband confronted the boys and told them to back off and leave the girls alone, which they did, but not before scowling their disapproval and muttering at him under their breaths.

The incident crossed my mind when I came across new research showing that 15 to 25 percent of teen girls feel “bombarded” by “sexting,” including requests for nude photos, and that too many of them just don’t seem to be able to say no.

Study author Sara Thomas, from Northwestern University, analyzed 462 self-reported stories and found that girls who were asked to send nude photos were “‘overwhelmed, confused, tired, bombarded’ and trapped between the conflicting pressure of saying both yes and no. [The girls’] worries were overshadowed by more immediate day-to-day pressures, such as wanting the relationship, promises of love and trustworthiness, persistent requests, anger, harassment, and threats.”

“Faced with these pressures, young women often acquiesced to young men’s terms for romantic and sexual engagement,” Thomas says. “While many young women took on the responsibility of negotiating these pressures, they were also confused and didn’t have the tools to cope.”

Couldn’t say no. Had a hard time resisting. Longing for love and approval. Trying to make him happy. Don’t want to hurt his feelings. These are all sentiments that are are all too familiar to many young women.

Often young teen and tween girls aren’t emotionally mature and secure enough to give a firm no to unwanted advances without feeling guilty. That is when they need their dads — to fight for them, to let them know there is a man in their lives who loves them purely, has their best interests at heart, and will protect them. Dr. Meg Meeker discusses this beautifully in Strong Fathers, Strong Daughters, which should be required reading for fathers of daughters.

Meeker shares extensive research in her book, pointing out that “Girls who are close to their fathers exhibit less anxiety and withdrawn behaviors …. [They] are more assertive [and] have significantly fewer suicide attempts and fewer instances of body dissatisfaction, depression, low self-esteem, substance use, and unhealthy weight …. Girls with fathers who are involved in their lives have higher quantitative and verbal skills and higher intellectual functioning …. A daughter’s self-esteem is best predicted by her father’s physical affection ….  Girls with good fathers are less likely to flaunt themselves to seek male attention” (pp. 23-24).

Could I have intervened and confronted the boys at the beach myself if my husband hadn’t done it first? Of course. The momma bear instinct is alive and well and I would always try to protect my daughter (or son) from harm. Sometimes dad isn’t around and mom has no choice but to cover all the bases. But there’s something special about my husband’s fatherly protection of my daughter that I can’t quite replicate in the same way. Even though my daughter relies on me in countless ways, there’s an emotional security, a deep well of confidence tied to her dad’s love for her that is not — and cannot be — exactly paralleled in my own love.

A father who is willing to love and protect — and fight for — his daughter is teaching her powerful life-long lessons about her own self-worth. He is showing her through his actions that, to the most important man in her life, she is worth defending, worth sacrificing for. That her value as a person is so great that he will go out of his way to make sure she’s taken care of. This translates, years down the road, into the development of a mature woman who is far more likely to be mentally and emotionally strong, secure and confident.

Hats off and kudos to the dads who earn the honor of being their daughter’s heroes.

Read more:
Does your husband need help being a father?