York Minster to auction stones from the iconic cathedral 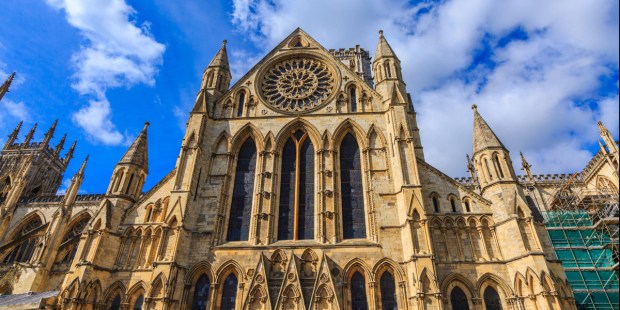 All proceeds will go toward further conservation work on York Minster.

The Cathedral and Metropolitical Church of St. Peter in York, more commonly known as York Minster, is undergoing conservation work that has seen some 140 large stones removed from its facade. To raise funds for further conservation efforts, they will be auctioning off these stones on August 22.

The Medievalist reports that the lots up for auction range from 14th-century stones to those from the Victorian era. Some appear as no more than large hunks of rock, while others are ornately carved with grotesques and finials, and 10 lots that form an 18th-century pinnacle.

This is the first such auction York Minster has held since 2016. They have made the lots available to view by interested parties in an online catalogue.

The auction is part of a four-day celebration of the ancient craft of stonemasonry at the minster. It began with the annual Stoneyard Open Day on August 17, and the following two days saw an international Stone Carving Festival in Dean’s Park. More than 70 stonemasons from around the world were expected to participate, showcasing their skills and carving to the theme “All creatures great and small.”

Neil Sanderson, Director of the York Minster Fund, said in a statement, “York Minster is an international icon and we’re very grateful for the interest and support it attracts from around the globe. We’re delighted to be able to offer an online catalogue for the first time this year for those who can’t make it along to the auction but would like to own a piece of the cathedral, which has a special place in so many people’s hearts.”

York Minster has existed in one form or another since the 4th century. It began as a simple wooden building, known as a “minster,” or missionary church, during the Anglo-Saxon period. It was rebuilt in stone during the 7th century in the Norman style. The next few centuries saw two different fires destroy the building, which was rebuilt grander each time.

During the English Reformation, York became a seat of the Church of England.