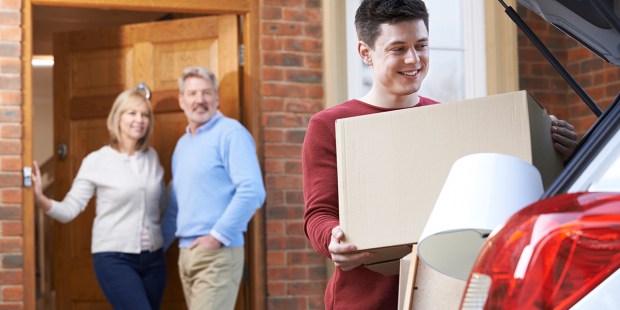 A family psychologist provides insight into how to deal with the challenge of suddenly having no kids at home.

The academic year is in full swing. Children have left for college — often to another state and sometimes even to another country. Parents have stayed behind at home, and now may be experiencing what is commonly called “empty nest syndrome.”

Aleteia’s Zuzanna Górska-Kanabus spoke with with Sabina Zalewska, a family psychologist, about the feelings parents go through when children leave home, and began by asking her about empty nest syndrome.

Zuzanna Górska-Kanabus: What exactly is this phenomenon?

Sabina Zalewska: Empty nest syndrome is a group of symptoms that occur in parents when their children become independent and leave the family home. First of all, it often means that the spouses are likely to fight more often and have difficulty satisfactorily solving their disputes. Instead of feeling joy and fulfillment in a relationship, they feel defeat and frustration. They have more time for each other, but don’t know how to be alone together anymore. Their spouse’s presence irritates them instead of causing joy.

Sometimes one parent will start supporting their newly independent child without consulting the other. Usually, one will offer financial help or assistance of some other kind, without talking to the other parent about it ahead of time.

A strong sense of emptiness and loneliness is another symptom, which can sometimes transform into depression. That’s the most painful symptom of empty nest syndrome. The parents as a married couple find it hard to adapt themselves to the new situation. They should start rebuilding their marriage and relationship as a couple, but don’t know how. Having been focused on their children and their needs and care for many years, they don’t know how to refocus their attention on each other.

ZKG: Is everyone bound to experience empty nest syndrome?

SZ: That depends on many factors, such as whether it is the first or last child leaving home, or perhaps the child they feel most connected to for one reason or another. For example, parents may develop a special bond with a child who went through a serious illness earlier in life. If the parents are working outside the home, they can focus on things other than caring for children, and they are less likely to suffer from empty nest syndrome.

Also important is the reason why the children left home. When it’s college or work, it’s often easier for the parents to get used to the change. On the other hand, if marriage is the reason, it can be more difficult for the parents. Often, mothers are the ones who find it more difficult to come to terms with the fact that their children have become independent. Sometimes there is friction between the parents and their son- or daughter-in-law, and that only makes it harder to accept the change.

This all is due to the fact that some parents have a hard time dealing with the pain of knowing that their children, for whom they have done so much, are leaving because another person is now more important than they are. The parents then channel their pain to anger, which they direct at their daughter- or son-in-law. It’s normal for children to leave their parents, but that doesn’t mean it doesn’t hurt, and that the pain won’t be expressed in some way.

It’s important to remember that parent-child relationships are diverse and dynamic. Relations between parents and children are characterized by the continuous cutting of ties. This process can be represented by an image of an onion, with its peeling layers — we think we got over the loss, but soon we notice new ways (layers) the children separate from us, and we have to get used to those, too.

For parents and their growing children, the main task during adolescence is to learn how to live increasingly separate lives, to find themselves in new situations, build new family relationships, and above all, to re-create their own identities.

ZGK: How can parents suffering from empty nest syndrome help each other?

SZ: They should turn towards each other, and notice the positive side of being alone by themselves. They should make their dreams come true, develop their interests and work on self-fulfillment. They finally have time for all that. The relationship between the spouses also changes. More than ever, they become each other’s support, the person they can count on, especially during illness. When married couples try to cultivate positive relations, in time they will discover joy and satisfaction in the new state of affairs.

ZGK: What advice would you give to children whose parents can’t cope with empty nest syndrome?

SZ: To be patient. It’s a transitional period. Sometimes, however, the feeling of loneliness and solitude during this period is so great that parents are unable to get through this phase alone. In that case, therapeutic help is needed.

Sabina Zalewska is a family psychologist with a Ph.D. in humanities in pedagogy. She lectures at the Faculty of Christian Philosophy and works at the Dewajtis Archdiocesan Clinic.