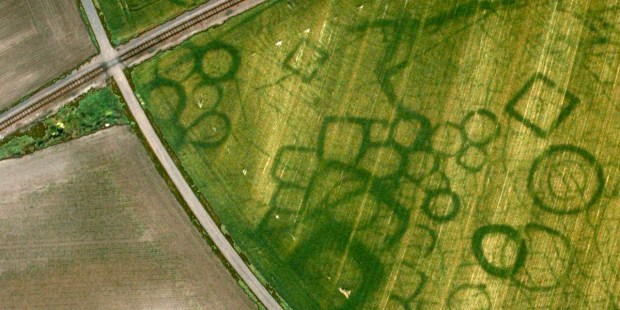 Many mysterious marks emerged across the British countryside, belonging to ancient burial sites.

This past summer has been one of the hottest in recent history and has left a profound and often devastating mark on locations as far flung as California and Greece, both of which were affected by deadly fires partly sparked by unusual heat.

But hot temperatures have resulted in another, less destructive, effect: the accidental discovery of hidden archaeological sites across Britain. Prolonged drought has turned the usually lush green English countryside into a parched yellow that revealed the shape of ancient ruins when viewed from above, many of which reveal the spiritual nature of our long-gone ancestors.

Through a practice defined as “aerial archaeology,” a group of researchers from Historic England, a public body in charge of protecting the country’s historical environment, has been flying over the areas in order to study the “mysterious crop marks” emerged during the dry spell.

“This spell of very hot weather has provided the perfect conditions for our aerial archaeologists to ‘see beneath the soil’ as crop marks are much better defined when the soil has less moisture,” said Duncan Wilson, chief executive of Historic England, in a release. “The discovery of ancient farms, settlements and Neolithic cursus monuments is exciting. The exceptional weather has opened up whole areas at once rather than just one or two fields and it has been fascinating to see so many traces of our past graphically revealed.”

Thanks to hours of flying, Wilson and his team have been able to take aerial photos of the newly emerged sites scattered around the British countryside. Some of the most notable ones include:

1. Two Neolithic “cursus” monuments, Clifton Reynes, Milton Keynes
Discovered near Clifton Reynes, Milton Keynes, southern England, these two long rectangles—known as “cursus monuments”—date back to 3600 to 3000 B.C. and  probably served as enclosed paths or processional ways or as demarcation barriers between landscape zones during the Iron Age. They are are among the oldest monuments in the country.

2. Iron Age round, St. Ives, Cornwall
Rounds, circular banks with an outer ditch, were a common type of settlement  in Cornwall during the Iron Age. In this case, archaeologists were able to spot a crop mark revealing the outer ditch, as well as a separate rectangular enclosure and a double-ditched enclosure just nearby.

3. Iron Age square barrows, Pocklington, Yorkshire
The visible mark of four squares indicate the remains of an Iron Age burial site on the Yorkshire Wolds—the crop marks probably mark the ditch that surrounded a burial mound. These kinds of square barrows have been a common find in the area, suggesting that burials featuring elaborate grave items like chariots were probably common.

4. Roman farm, Bicton, Devon
Aerial archeologists spotted a series of crop marks in a field of grass cut for silage in Bicton, Devon, that probably indicate farming activity during Roman times. The central enclosure may have contained agricultural buildings, with more fields and paddocks attached to the central area.

5. The foundations of an Elizabethan building, Staffordshire, West Midlands
The site of Tixal Hall, a 16th-century gatehouse located  in Staffordshire, in the West Midlands, was already known to archaeologists. But the unusual drought has revealed light lines in the ground that reveal the buried foundations of the building, dating to 1555, as well as the foundation of a hall built during the First World War and demolished in 1926.