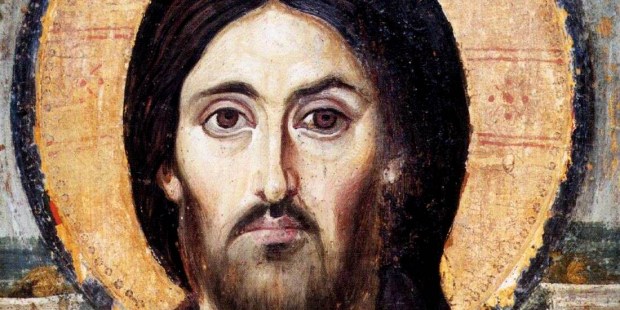 From the relatively unknown first-century Alexamenos graffito, to the famous sixth-century Egyptian Pantrocrator

As outlined in a recent article about the realistic “looks” of Jesus, much of what we know about Jesus’ looks is a product of artistic convention. Since Scripture does not provide a description of what Christ looked like, painters and mosaic-makers would often resort to the artistic canons of their time to create a visual image of the Nazarene. This means that some of the earliest depictions of Jesus offer a precious insight into the diverse iconography style of the places and people that made up early Christianity. Here is a list of the six most ancient depictions of Jesus known to historians:

This “graffito,” representing a person looking at a donkey-headed man being crucified, was carved in plaster on a wall in Rome during the 1st century. If you are feeling confused or offended by its content, that’s because it was not created as a celebration of Jesus but rather as a mockery. During the 1st century, Christianity was not an official religion and most Romans citizens looked at its practitioners with suspicion and skepticism. This graffiti was probably created to make fun of “Alexandros,” a Christian, by implying that he worshiped a “donkey-headed” God. The inscription that accompanies the image indeed reads: “Alexandro worshiping his god.” And the fact that “Alexandro’s God” is being crucified makes it even worse, as during the 1st century crucifixion was a punishment reserved for serious crime offenders.

While the Gospels do not provide us with a physical description of Jesus, they do offer many figurative descriptions to describe him. Perhaps the most striking one is the metaphor of the “Good Shepherd.” In the Gospel of John (10:11 and 10:14), Jesus states: “I am the good shepherd … the good shepherd lays down his life for the sheep.” So it is not surprising that many early Christian artists choose the image of the shepherd to depict Christ. And they mostly did it by incorporating already existing shepherd motifs typical of Greek and Roman art. This image, painted on the walls of the St. Callisto catacomb in Rome, shows Jesus as he is carrying a calf on his shoulder, following the iconic figure of the “moskophoros,” literally the “the bearer of the calf,” whose first depiction in ancient Greek art dates to 570 BC.

3. Adoration of the Magi, 3rd century

Another image of Christ presented in the New Testament is the adoration of the Magi, described in Matthew 2:1-12. As a result, the “epiphany” was one of the most popular representations of the life of Christ during Christianity’s early days. This picture of the Magi adoring the Child was produced to decorate a sarcophagus dating to the 3rd century, which is now kept in the Vatican Museum in Rome.

4. Healing of the Paralytic, 3rd century

One of the miracles of Jesus chronicled in the Gospels—Matthew (9:1–8), Mark (2:1–12) and Luke (5:17–26)—sees him healing a paralytic man at Capernaum, in modern-day Israel. Since then, that episode has been a recurring feature of Christian iconography. This depiction of the healing of the paralytic, dating to the 3rd century, was found on the baptistry of a long-abandoned church in Syria. It is one of the earliest depictions of Christ known to historians.

This image of Christ, dating to the 4th century, shows him between St. Peter and St. Paul. It was painted in the Catacomb of Sts. Marcellinus and Peter on the Via Labicana in Rome, located near a villa that used to belong to Emperor Constantine. Below the main figures of the painting—Jesus, Peter and Paul—we find Gorgonius, Peter, Marcellinus, and Tiburtius, four martys who had been buried in that catacomb, and are depicted as they point to the Lamb of God on his heavenly altar.

The Greek word Pantocrator literally means “he who has authority over everything.” That’s how two Hebrew expressions used in the Old Testament to describe God, the “God of Hosts” (Sabaot) and “Almighty” (El Shaddai), were translated into Greek. In order to represent such mighty qualities, Byzantine iconographers made use of features, such as an open right hand, that could convey a sense of power and authority. This image is the oldest known example of “Christ Pantocrator” in the world. The different expressions shown on the right and left sides of Jesus’ face may suggest his double nature as both human and divine. It was painted on a wooden board during the 6th or 7th century and is currently preserved at the Monastery of St. Catherine on Mount Sinai, in Egypt, one of the oldest monasteries in the world.