Pope Francis: Paul VI and Romero, saints who were not afraid to risk their own lives

The Church celebrates the canonization of seven new saints.

Pope Francis has presented seven new saints to the Catholic faithful, including Pope Paul VI and Archbishop Oscar Romero, as examples of fearless, radical Christian lives. These are saints, the Pope said this Sunday in St. Peter’s Square in front of a crowd of around 70,000 people gathered for the canonization ceremony, “who knew how to abandon positions and power for the love of Christ.”

Francis wore the cincture Archbishop Romero himself was wearing when he was shot in the chest on March 24, 1980, while officiating Mass at La Divina Providencia hospital, in the Salvadoran capital. The cincture is still stained with the saint’s blood.

Read more:
The bond between Romero and Paul VI, now to be canonized together

As many as 5,000 Salvadorans present in St. Peter’s Square cried, prayed, and expressed their joy at an event they were patiently waiting for, for the past 28 years.

The Pope referred to Paul VI as “a saint who lived amidst difficulties and misunderstandings” and to the new Central American saint as “the bishop of the poor:” “It is beautiful that, next to Paul VI and the other saints we recognize today, we find Monsignor Romero, who left the security of the world, including his own safety, to surrender his life to the Gospel, remaining close to the poor and his people.”

The same can be said of Francesco Spinelli, Vincenzo Romano, Maria Caterina Kasper, Nazaria Ignazia Saint Teresa of Jesus, and also of the 19-year-old from Naples, Nunzio Sulprizio, who was also canonized.

Read more:
Teenager to be canonized with Paul VI and Oscar Romero

About Sulprizio, and in the framework of the Synod dedicated to young people, Francis said “he was a “young, brave, humble saint, who knew how to find Jesus in suffering, in silence and in the offering of his own self.” 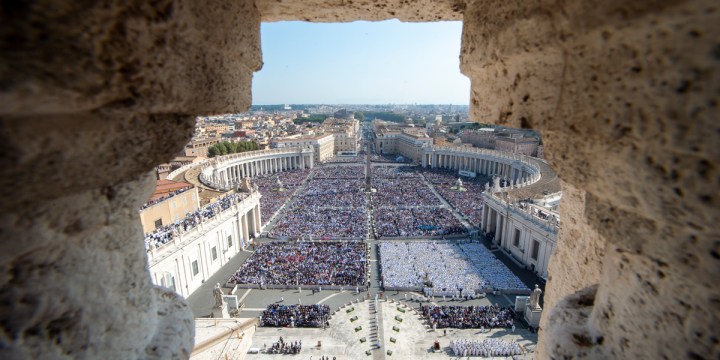