Among those cheering Romero: the woman saved by his intercession 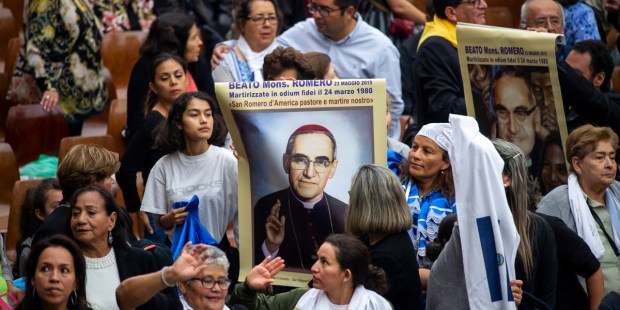 Pregnant and close to death, she fully recovered and gave birth to a baby boy

Cecilia Rivas, a Salvadoran woman whose miraculous healing made possible the canonization of Archbishop Oscar Romero on October 14, 2018, was present during the ceremony presided over by Pope Francis in St. Peter’s Square in the Vatican, reported CNN in Spanish.

In 2015, Cecilia Rivas’s pregnancy was going badly. The young woman was in a coma and close to death. While leafing through his Bible while praying, her husband found a picture of Blessed Romero (1917-1980). He then decided to pray for the Blessed’s intercession for the health of his wife, who completely recovered and gave birth to a baby boy.

Recognized by the Vatican after a “long process” of examination—in the words of the young woman—this miracle paved the way for the canonization of Bishop Romero on October 14, alongside six other blessed. Cecilia Rivas was present for the ceremony, along with a thousand of her compatriots.

Before leaving for Italy, Cecilia Rivas went to the chapel where Monsignor Romero was murdered on March 24, 1980, at the age of 62, while celebrating Mass.

Nicknamed “the bishop of the poor” because of his defense of campesinos – the poor peasants – the then archbishop of San Salvador denounced the actions of the ruling junta and the very strong social inequalities in this small Central American country.

Read more:
Oscar Romero on the loveliness of suffering