The emotional moment a runner with cerebral palsy finds out he’s a professional, sponsored athlete (Video) 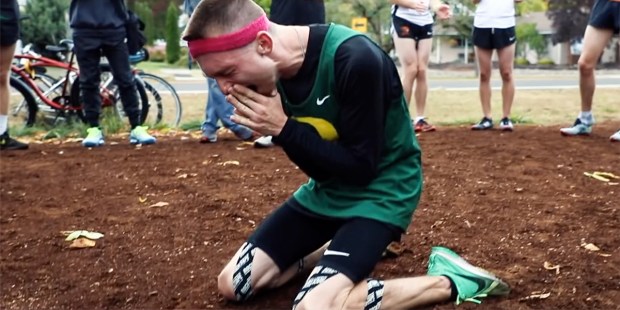 “Trust the process! And most of all trust in God! God is good!” says Justin Gallegos.

World Cerebral Palsy Awareness Day was extra special this year for athlete Justin Gallegos. Gallegos — a member of the Track Club at the University of Oregon — thought he was running a cross country race, but got an even bigger surprise when he crossed the finish line. He thought the cameras were there to capture him breaking a two-hour barrier in the half marathon, but they were also there to capture Gallegos breaking a different type of barrier — that of being the first athlete with cerebral palsy to be a sponsored athlete for Nike.

No stranger to running, Gallegos has been competing in the sport since he was in high school, and in June of 2016, he won gold in the 400 meters in the Paralympics-Ambulatory division at the California State Track & Field Championships. Running with cerebral palsy isn’t easy. It’s a neurological disorder that affects body movement and muscle coordination, and ranges in severity. Gallegos also has a speech impairment and lacks muscle control, which means that while he can walk and run unaided, his feet sometimes drag and cause him to fall.

Gallegos hasn’t let his extra challenges in running stop him, though. As he has continued training over the past seven years, he has improved his gait and now rarely falls. He can even clock an impressive just-above-7-minute mile. In the winter of 2017, Justin set his sights on a new goal: to run a half marathon, and to do it under two hours. Gallegos’s story got back to the athletic company through a friend of his who worked there, and at his urging the company designed a running shoe that fit his needs.

Gallegos is known by his teammates, friends and others as someone with an incredible will and amazing determination. On his own Instagram account, appropriately dubbed “@ZoomMagic,” he said, “I was once a kid in leg braces who could barely put one foot in front of the other! Now I have signed a contract with Nike Running! Trust the process! And most of all trust in God! God is good! Thank you to all my friends, family, and teammates on running club… This moment will live forever! Thank you everyone for helping show the world that there is No Such Thing As A Disability.”

Watch the inspiring and tear-jerking moment when Justin found out he’d been signed as a professional, sponsored athlete below: