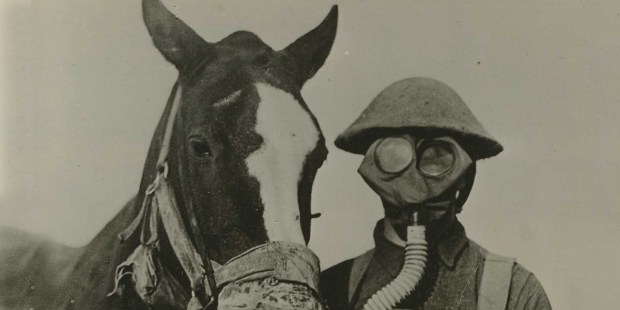 They’ve helped me to redeem my faith and reorient my sense of self.

We tell a lot of stories in our family. From my perspective as a four-year-old, Dad told the best stories. He talked about Grandpa, a U.S. soldier in World War I who cared for the army’s horses. When Grandpa returned from winning the war, he became a respected veterinarian in rural Wisconsin. Even as a little boy, I understood that Grandpa lived his faith by serving his community. The man, gone eight years before I was born, grew stronger and bolder with each telling.

Whether or not Grandpa could accomplish that particular feat was unimportant. His broad-brimmed campaign hat and leather cartridge box hanging in our family room made the stories come alive. I’d wear the hat and ask about Grandpa in the war. Was he sad when his horse got shot out from under him? Was he scared during the fighting?

From that time onward, Grandpa’s legacy made a large, if quiet, impression on what I wanted to accomplish in life. After college, I joined the Jesuit Volunteer Corps because I wanted to serve a cause larger than myself, much as Grandpa did when he enlisted in the army. I was assigned to an agency in Philadelphia that helped the chronically homeless — those vulnerable hard cases that live on the street and often decline conventional social services.

Considering the stories I devoured as a little boy, I had big ideas about returning home with my own tales of frontline service in urban poverty. Sometimes the task was going to be hard, sure, but my faith would help me to rise above the difficulties. And Grandpa and I were both in our early 20s when we started our respective adventures. Did I need a better motivator than that?

I just didn’t realize that I wanted, in my own naive way, to live the myths about Grandpa and his experience of frontline service.

Within a month, the situation in Philadelphia brought my vision of being a champion for the poor down to earth. 2006-2007 set a record of brutality in that decade for the City of Brotherly Love, with nearly 400 murders and rampant violent crime. Many with whom I was talking had been on the streets for years. Living in poverty was the norm for them, and the violence of living on the street was a daily reality.

Soon I carried stories of homeless people I knew being assaulted, of neighbors being killed. I even obtained a souvenir: a knife with a five-inch blade confiscated at my agency. I got a small taste of what anger and sadness and despair felt like for a person living in urban poverty.

My own experience removed the myths of Grandpa’s stories and made what he endured more relatable. Upon deeper reflection, nothing about his experience as a soldier seemed redemptive. He never bragged about a heroic achievement. Rather, his stories held quiet acceptance of the true meaning of resilience and courageous commitment to a cause larger than himself.

I began to research the harshness behind his stories in the French countryside. For example, in a story about hauling cannons to the front near Chateau-Thierry, Grandpa described rows of dead soldiers so thick that it was hard to move forward without stepping on bodies. The dead stacked under a punishing July sun would have been a common experience for him. And according to my dad, Grandpa responded with silence when asked if he had killed anybody, which I believe is the answer itself.

Yet for me, Grandpa’s most poignant story is one he rarely talked about: his chance survival of chemical warfare. He only described being unable to fasten his mask before the shells filled with poison gas exploded near his position.

While he may not have spoken about that moment, thanks to fellow World War I soldier and poet Wilfred Owen, I can imagine his experience:

Dim, through the misty panes and thick green light,

As under a green sea, I saw him drowning.

In all my dreams, before my helpless sight,

He plunges at me, guttering, choking, drowning.

That was how Grandpa finished his service in World War I. And like many wounded veterans, Grandpa’s endurance of hardship did not end on the battlefield. His return home was in many ways equally perilous, with a lengthy recovery that left him weak for a long time. Grandpa’s future mother-in-law worried that his condition would make him a bad bet for a husband and a poor choice for a father.

His stories kept him going, though, and it was the one about his return home that helped me the most once I finished my service commitment.

I departed Philadelphia under a cloud of confusion. Many of the homeless people I met on my first day were just as homeless on my last day. I had witnessed the worst of what violence and apathy could do to a community. I was not convinced that I had accomplished anything helpful toward bettering the neighborhood.

Reflecting on Grandpa’s stories of how he served the community throughout his life helped me to redeem my faith and reorient my sense of self. I recognized that Grandpa, unlike many who survived the brutality of the trenches, refused to become cynical.

Instead he chose to focus on civic engagement, despite what terrible atrocities he had witnessed. He chose to orient his life goals not just on that initial and formative wartime experience, but rather on what he could accomplish as a veterinarian, a school board member, a husband, and a father. Grandpa chose to love others. One hundred years ago, this is the legacy he began modeling for our family on how to live a good life.

Over a decade has passed since I lived in Philadelphia, and my stories have seen me through. Like Grandpa, I have fallen down and gotten back up. I’ve become a husband, father, and godfather. I’ve discovered a vocation and built a career. Daily, Grandpa’s life story reminds me of my faith, and it is this legacy that I do my best to emulate.

Read more:
World War I ended 100 years ago. But do you know why it began?