Think of Arizona and the majestic beauty of natural wonders like Monument Valley or the Grand Canyon comes to mind. But about ten miles south of Tucson lies a human-made wonder that attracts thousands of visitors each year: the Mission San Xavier del Bac, one of the oldest Catholic sites in North America. 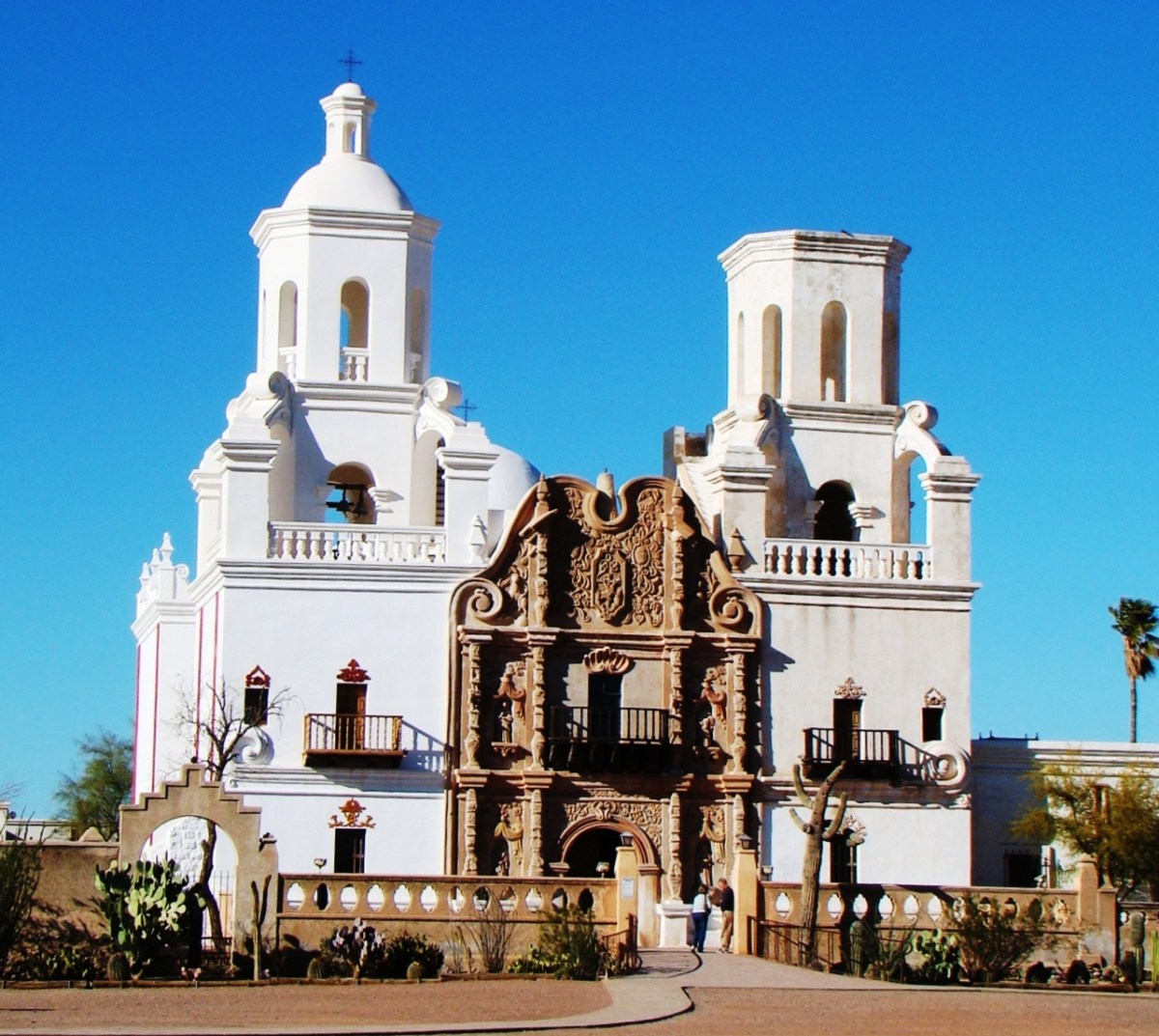 Standing as the oldest European structure in Arizona, the mission was established in 1692 by Padre Eusebio Kino, an Italian Jesuit who traveled from Europe to the “new world” in the late 17th century. Kino was particularly active in an area that corresponds to the modern day states of Sonora, Mexico, and Arizona, United States. He was especially known for his ability to cooperate with local indigenous populations, especially the Upper Piman groups such as the Tohono O’Odham and Sobaipuri tribes. Unlike most Spanish colonial leaders, Kino strongly opposed forced labor of local natives and fought for an equal treatment of local tribes. A man of multiple talents, he was a trained astronomer, mathematician and geographer. Thanks to his explorations, he helped prove that the peninsula of Baja California was not an island as it was previously assumed. And as a missionary, he helped establish as many as 24 missions and “visita” (the equivalent of “country chapels”) by the time of his death in 1711.

Of all the missions he helped built, the Mission San Xavier del Bac certainly stands out due to its eventful history. The original structure was built on a site known to locals as “where water goes in” after a hydric phenomenon in which water “disappears” into the land only to resurface a couple of miles down the road. The land was in use by Jesuits between 1692 and 1767, when Charles III of Spain banned the Jesuit order from Spanish lands in the Americas and replaced it with what he considered the more “reliable” Franciscan order.

But things did not go too well for the newly appointed Franciscan brothers. The mission started to attract attacks from the nearby Apache tribe that eventually destroyed the building in 1770. It took more than a decade for the mission to get back on its feet under the supervision of  Franciscan fathers Juan Bautista Velderrain and Juan Bautista Llorenz who oversaw the construction of a new building employing local workers from the O’odham tribe.

Velderrain and Llorenz opted for a hybrid architectural style, featuring a mix of New Spanish, Baroque and local Native American elements. The church’s white stucco facade was decorated according to Moorish design and features a large carved wood door that helps insulate its interior from the heat. A rich collection of colorful paintings, carvings, frescoes, and statues, by three different Spanish artists were used to decorate its interiors. The shell, a symbol of pilgrimage, is a recurrent motif through the church decorations, from its facade to its windows.

By 1797 the mission was fully restored and this time it enjoyed the protection of the newly-established Spanish colony of Presidio San Augustin del Tucson just seven miles down the road. But peaceful times did not last long. In 1821 Mexico won its independence from Spain and seven years later, in 1822, the new Mexican government banned all Spanish priests from the newly established state. By 1837 the last Franciscan friar had fled San Xavier leaving the mission vacant. Despite efforts of local tribes that sought to preserve its architecture, the complex quickly began to decay. But its fate was restored in 1858 when the United States acquired some land from Mexico, a land transaction known as Gadsden Purchase, including the territory on which San Xavier was built. By 1868 the complex had been annexed to the Diocese of Tucson which began restoration of the building.

Soon enough, San Xavier was once again a thriving Catholic outpost holding regular Masses, with a newly established missionary school that catered to local O’odham children. In 1913, Franciscan friars made their long-awaited return to San Xavier and few years later started an intense restoration project to return the complex to its original splendor.

Part of the work included replacing cement based stucco with mud plaster that is less susceptible to damage from water, that same water that led native tribes to refer to the site as the “place where water goes in.” The interior decorations of the church were also subject to an intense restoration that brought colors back to their original depth. By 1960, the mission was declared a National Historic Landmark by the US National Register of Historic Places. Today, San Xavier del Bac stands as one of the finest example of Spanish mission architecture in the United States attracting as many as 200,000 visitors each year.