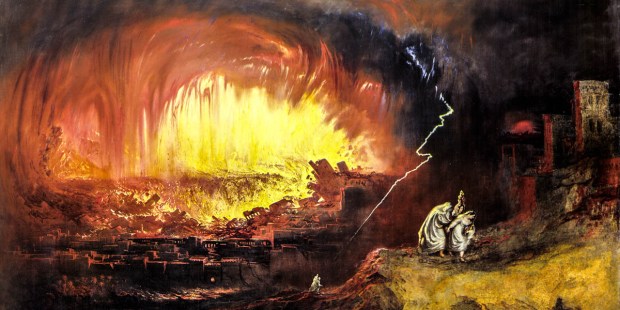 A meteor can cause just as much destruction when it explodes before impact.

For over 13 years a team of researchers from Trinity Southwest University in Albuquerque have been excavating the site of Tall el-Hammam, in the Jordan Valley, a site where many believe the biblical city of Sodom once stood. Investigating the disappearance of a Bronze Age civilization along the north side of the Dead Sea some 3,700 years ago, team leader Archaeologist Phillip J. Silvia believes the destruction of the fabled city was due to a powerful airburst from a meteor colliding with Earth’s atmosphere.

An airburst is created when a bolide — an extremely bright meteor — explodes within our atmosphere, creating a fireball that can be brighter than a full moon. When a meteor explodes before it reaches the ground, it can cause vast destruction to the area below, without leaving the tell-tale enormous craters of impact.

The team presented samples from their excavation at the annual meeting of the American Schools of Oriental Research last month. The samples revealed that an extremely hot, explosive event leveled some 200 square miles in and around the Dead Sea.

Forbes has an excerpt from the conference presentation in which the team noted the lasting affects of such an airburst:

“… not only wiping out 100 percent of the Middle Bronze Age cities and towns, but also stripping agricultural soils from once-fertile fields.”

They go on to suggest that the resulting shockwave could have covered the once fertile region with “a super-heated brine of Dead Sea anhydride salts.” This could account for the archaeological evidence that shows it took nearly 600 years for civilization to return to the area, as the soil would have been useless for agriculture.

The evidence found likens the event to the infamous Tunguska incident in 1908, in which a fireball in the sky preceded an explosion that leveled a swath of Siberian forest. The case of Tunguska mirrors Sodom in that researchers only began examining the site long after the events of the explosion, leaving very little evidence to study.

Another, much smaller, airburst was recorded over the Russian city of Chelyabinsk in 2013, which, although small, was strong enough to blow out thousands of windows of baffled residents.