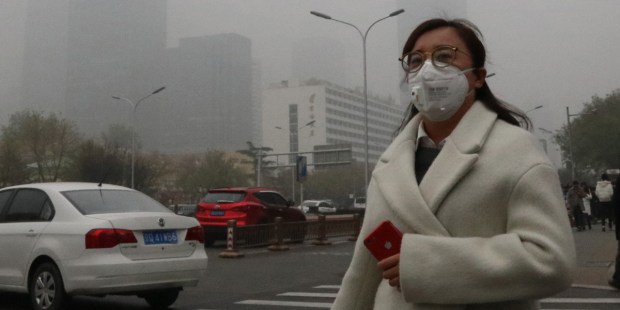 For decades, China has sacrificed the environment and the climate for economic growth; indeed “growth was above all else,” the Neue Zürcher Newspaper reports in a German-language article published on October 8 focusing on the environmental challenges that the Asian giant is facing.

The fact that Beijing is serious about it now can be seen in a speech given in the fall of 2017 by the President of the People’s Republic and General Secretary of the Chinese Communist Party (CCP), Xi Jinping, at the XIX Congress of the party. In his speech, the strong man from Beijing, who was re-elected by the CCP for another five years, used the word “environment” 89 times and the term “economy,” only 70 times, observes the Swiss daily.

Perhaps the most obvious challenge is that of air pollution. Especially in the Jingjinji Metropolitan Region, which is the capital region including Beijing, the port city of Tianjin, and the province of Hebei, the thick covering of smog often makes the air unbreathable.

According to the Neue Zürcher, in the region the average annual value of PM2.5, or fine particulate with a diameter of less than 2.5 microns which can be inhaled and penetrate deep into the lungs, far exceeds—by 90 micrograms (μg) per cubic meter of air—the 10 μg threshold established by the World Health Organization (WHO). In February 2014, the concentration of PM2.5 even reached 505 μg in Beijing, according to the Guardian.

To improve air quality—it is estimated that PM2.5 particulate causes more than a million premature deaths per year in the country—the Chinese authorities have already taken a series of measures, including a decrease in the consumption of coal—the most polluting fossil energy source—and the promotion of renewable energy.

Unlike the US, which withdrew from the Paris Climate Agreement, China is making such a great commitment that it will dominate the renewables sector in the coming decades, according to a report by the IEFA (Institute for Energy Economics and Financial Analysis), cited by the Guardian (January 10). While China is emerging as a global technology leader, “the US government looks the other way,” said the body’s director and author of the report, Tim Buckley.

China is also pushing the accelerator on electric transportation, the Neue Zürcher continues. By 2025, one in five cars (20 percent) sold in the Middle Kingdom—as China was once called—will have to use alternative propulsion technologies. Last year the share was only 3 percent, observes the Swiss newspaper. Currently, 40 percent of the approximately 3.1 million electric cars sold worldwide travel on Chinese roads.

Not only the air but also the soil of China is often heavily polluted; this is also a consequence of a lack of adequate policies for the disposal and/or recycling of waste. The pollution of agricultural land is worrisome.

In December 2013, an official source spoke of about 3.3 million hectares of polluted agricultural land, most of which was used for growing cereals, as reported by the Guardian (January 23, 2014). According to estimates by the respective ministry, about 12 million tons of cereals are destroyed every year because they are polluted by heavy metals and therefore not suitable for consumption.

According to the Chinese authorities, an agricultural area almost equal to that of Belgium (around 30,500 km²) must be reclaimed, because it is too polluted. The goal of Beijing is to rehabilitate by the end of 2020 almost all of the contaminated farmland, or 90 percent, said Environment Minister Li Ganjie last February.

The question of water

The question of water in China is also of crucial importance. First of all, it is scarce in various areas of the huge country. While more than three quarters of the water resources, 80 percent, are located in the south of the country, half of the Chinese live in the north, which is also very arid: the amount of water available to cities such as Beijing and Tianjin is only slightly superior to Saudi Arabia, recalls the Neue Zürcher.

For this reason, China has been running a series of major water projects for decades, including dams for hydroelectric power generation, which also allow the accumulation of vast amounts of water in artificial basins.

As Brahma Chellaney explains in the South China Morning Post, China currently has a total of 86,000 dams, which means that on average the country has built at least one a day since 1949, i.e. the year of the birth of the People’s Republic.

According to the author, the construction of all these dams has not only had a devastating impact on the environment—350 lakes have disappeared for example—but has also become an instrument in the hands of Beijing to put pressure on neighboring countries. In fact, many dams have been built on large transnational rivers, including the Mekong and the Brahmaputra, which are vital for millions of inhabitants of various Asian nations, such as Burma and Vietnam (Mekong), and India (Brahmaputra).

China has built eight huge dams on the Mekong just before the river enters Southeast Asia, and is building or planning another 20, explains the author, who denounces Beijing’s “accomplished” policy. With its control of cross-border water resources through the growing number of hydro-engineering projects, China “is dragging its riparian neighbors into high-stakes games of geopolitical poker over water-related issues,” says Chellaney.

Tibet: The water tower of Asia

The situation in Tibet is emblematic, where Beijing intends to create a huge network of fuel-burning chambers—we’re talking about of tens of thousands of them—with the aim of increasing the rains in the region by up to 10 billion cubic meters per year, or about 7 percent of the country’s water consumption. Once again, taken from the South China Morning Post.

Even if the method is not new—it has been tested for example also in the US—in the case of China, the colossal proportions are striking. According to the Hong Kong newspaper, the burners would be installed on a surface three times as large as the country of Spain. In theory, the network of burners could influence the weather and therefore also the climate on the Tibetan plateau—also called “the water tower of Asia,” since rivers like the Yangtze and the Brahmaputra are born right there—already being affected by mining exploitation, which is also increasing sharply.

The experts, including Brahma Chellaney, are concerned that the Tibetan water has ended up in the sights of the Chinese mineral water industry. In fact, the water of the Tibetan glaciers is liked by Chinese consumers, who have little confidence in the water that comes from the taps of large cities and therefore prefer bottled water—if possible, coming from the highlands of Tibet.

In fact, even surface water—like that of the subsoil—in China is dramatically polluted. According to the Facts and Details website, about a third of industrial wastewater and over 90 percent of domestic wastewater ends up in rivers and lakes without any prior treatment. So even the pollution levels of the most iconic rivers in the country, namely the Blue River (Yangtze), the Yellow River and the Pearl River, are dramatic.

Half of the Chinese population does not have access to safe drinking water and almost two thirds of the country’s rural population, i.e. more than 500 million citizens, consume water contaminated with industrial and human waste, recalls the Fact and Details website.

It is no wonder then that Xi Jinping used the word “environment” 89 times in his speech last fall. The protection of the environment is in fact a matter of life or death for millions of Chinese citizens, and up to a certain point therefore also for the CCP itself, which fears discontent, both of its officials and of the general population.