Why are Nativity scenes set up on mountaintops in Spain? 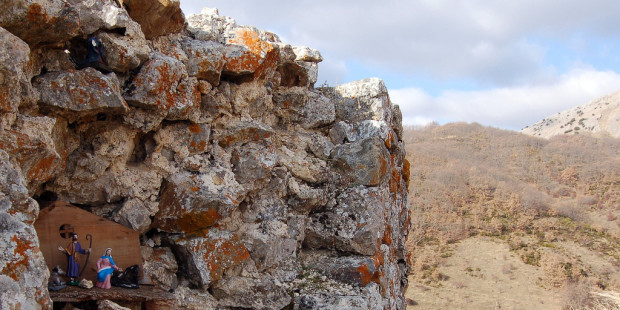 In the past century, mountaintop Nativities scenes have become a Spanish tradition.

Since the time when God became man at Christmas, the Christian people have created a whole world of religious customs and traditions full of tenderness and color.

Indeed, there are many popular traditions that mark the Christmas season, including setting up a Christmas tree, the placement of a Nativity scene or creche in a privileged place in the home, Midnight Mass on Christmas Eve, the Solemnity of the Holy Family on New Year’s Day, and the Feast of the Epiphany. Some countries have their own particular traditions, such as “posadas” in Mexico, where families reenact with songs and candles Mary and Joseph’s search for a place for Jesus to be born (ending with the breaking of a piñata).

Nativity scenes are a tradition all around the world. They are displayed in churches or monasteries, in hospitals, factories, schools and universities, in small shops, department stores, or malls, in the main square of towns or cities, etc.  In some neighborhoods, people literally compete to have the best Christmas decorations on their lawns and houses; although some displays focus on Santa Claus and more generic Christmas imagery, many also have a lighted Nativity scene at the center.

But people also place Nativity scenes in the strangest, most distant and inaccessible places, such as on the peaks of the highest mountains. When they read the Bible and it talks about proclaiming the good news of God’s salvation from the mountaintops (see Isaiah 52:7, for example), they take it literally! Or maybe they take their inspiration from the well-known Gospel-style hymn entitled “Go, tell it on the mountain” that dates back to 1865, written by African-American composer John Wesley Work Jr. The lyrics invite people to proclaim the birth of Jesus “on the mountain, over the hills, and everywhere.”

Whatever the inspiration, in the mid-20th century that Scripture-based idea of proclaiming Christ’s birth from the mountaintops gave rise to a new tradition in Spain: “Mountain Christmas,” or as it is called in some areas of northern Spain (Asturias and León), “Bethelem on the mountaintops.”

How does it work? Various groups of hikers, parishes, families, and groups of friends organize an outing to set up a Nativity scene, sing Christmas carols, and complete the event with a glass of sparkling wine and an exchange of typical Spanish Christmas sweets.  It’s a way of celebrating Christmas while visiting the country’s many mountains, which sometimes are difficult to climb, but which offer beautiful panoramas that help us appreciate the magnificence of nature.

Since its origin with St. Francis in Greccio, Italy, on Christmas Eve in the year 1223, making a representation of the Nativity has had three purposes. First, it’s a visual representation of God’s love for humanity; second, it sanctifies the place where it is placed, be it in the solitude of a mountaintop, in a family room, in a church, in a public square or in a shop window; and thirdly, its assembly is a moment for the people to celebrate the joy of Christmas.

“Bethlehem on the mountaintops” fulfills these three purposes, but also has other aspects that make it special. First, it involves placing a Nativity scene as close to heaven as possible, so that it gives “glory to God in the highest,” and fulfills what Scripture says: “Mountains and peaks, bless the Lord” (from Daniel 3:57-88, the Song of the Three Young Men).

Also, these Nativity scenes spend Christmas in the greatest loneliness; they are the least visited, unless some mountaineer passes by. They generally have a simple, modest, humble construction (usually made of wood or clay). In short, they remind us of what Mary and Joseph must have experienced that first Christmas night, finding themselves relegated to a humble stable, ignored and rejected by most of the people in Bethlehem.

This tradition of putting Nativity scenes on mountaintops began in the 1940s and 1950s. In the Spanish region of Asturias. A small group of ten Asturian mountaineers had the initiative and the desire to place a Crèche on the summit of Peña Ubiña, at an altitude of 7,217 ft (2,200 m).

There, they found a cave where they could set up the manger, providing both the proper setting and protection from the elements. It was a moving experience for the 10 mountaineers; despite being good and proven climbers, it was difficult and dangerous, due to the danger of a snowfall. Nevertheless, they didn’t let the challenge of the climb and the weather intimidate them. In this first Asturian Nativity scene, they made sure none of the key elements were missing: St. Joseph, Mary, the Child, and the Magi.

This was, perhaps, the first adventure of Bethlehem on the mountaintops, but at the end of the 1960s there were more mountaineering groups that also took up this tradition in different regions of Spain. This year, there are groups that are celebrating more than 50 years bringing a Nativity scene to the top of some emblematic mountain.

Nowadays, the expedition is often organized in more accessible places so that even families with small children or older people can attend. In the 21st century, this unique celebration of setting up a mountaintop Nativity scene is at its height.

Usually the crèche is arranged under a small overhang, or in a niche or cave in the rock, so that it is protected. This recreates almost perfectly the cave where St. Joseph, the Virgin Mary, and the mule and the ox were sheltered, and where the birth of the Savior took place.

On many occasions the crib is accompanied by a poster wishing happy holidays to the mountaineers who climb to that beautiful spot.

The Nativity scenes usually remain on the mountaintop until January 7, when they are removed. Sometimes, however, the crèches are left permanently on the top of a mountain.

This special climb takes place on the Sunday before Christmas Eve or before the winter solstice, and each mountain club chooses “its” summit to put its corresponding Nativity scene.

In Catalonia, this custom has become deeply rooted, and peaks such as Pedraforca, La Mola, or Matagalls have a long tradition of these “mountain mangers” or “crèche paths,” as they are called in this area.

These special Nativity scenes have been placed in places as high as the Aneto, the Mulhacén, or even the Teide (more than two miles high, at over 12,000 ft) in the Canary Islands. In fact, on that mountain, on December 21, 2014, a group of Canarian mountaineers placed the highest Nativity scene in Europe, at 12,198 ft (3,718 m) above sea level. It was an Italian Nativity scene made of chocolate, blessed by Pope Francis.

After eight centuries of history, the tradition of Nativity scenes is alive and well, a consolidated part of our Christian culture.

As Benedict XVI says, it’s “the most beautiful Christmas tradition.” A few days ago, before inaugurating the manger and the Christmas tree in the Vatican, Pope Francis said that “also the mangers set up in churches, in houses and in many other public places are an invitation to make a place in our life and in society for God, hidden in the face of so many people who are in conditions of discomfort, poverty, and tribulation.”

Hopefully, despite the ups and downs of life, this ancestral custom with deep Christian roots will continue to prosper and will help us visualize and live Christmas better.