It’s a mystery: Who penned “A Visit From St. Nicholas”? 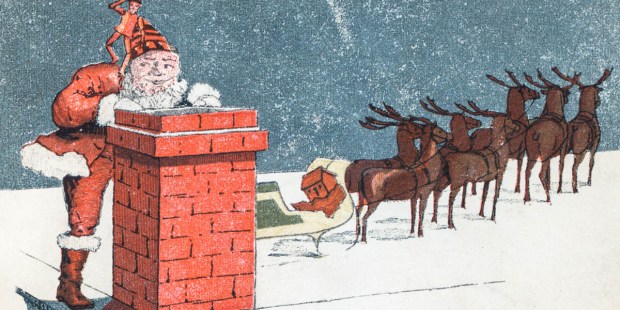 In the 19th century two authors claimed to have written the world’s most famous Christmas poem.

Twas the night before Christmas, when all throught the house …

Everyone knows the next line of “A Visit From St. Nick,” a 19th-century poem that perfectly captures the innocent expectations of Christmas Eve. What many do not know, however, is that nearly 200 years after it was penned, we still do not know exactly who the author was.

“A Visit From St. Nicholas” first appeared in the New York newspaper the Troy Sentinel, on December 23, 1823. At the time of its publication there was no name attached to it, and it remained unattributed for 13 years until the professor and poet Clement Clarke Moore stepped forward to claim the work. The story went that Moore had written the poem for his children, but a housekeeper found it and liked it so much she sent it to the newspaper, without Moore’s knowledge.

By 1844, the poem was included in an anthology of Moore’s work, but there was a problem. The family of Henry Livingston Jr., who died five years after the work was published and eight years before Moore took credit, claimed that Henry had been reading “A Visit From St. Nicholas” to them for 15 years prior to its publication.

A case for Livingston as the author rests on his Dutch background; his mother was Dutch and there are several Dutch references in the poem. We see the Dutch influence in the names of Santa’s reindeer, Donner and Blitzen, which were originally “Dunder” and “Blixem,” the Dutch words for “Thunder” and “Lightning.”

It is worth noting that “A Visit From St. Nicholas” appears to be source of all of Santa’s reindeer names, as there was no reference to them prior to the poem. This only makes us want to know the true author even more. Writing a timeless seasonal poem is one thing, but the man who named Santa’s reindeer deserves proper attribution!

Proponents of this theory suggest Blixem was changed to Blixen to better rhyme with Vixen and in 1844 Moore changed it to the more German Blitzen. Dunder changed over time to Donder, until the 20th century when it was changed again to Donner in order to match Blitzen’s new German name. Those who side with Moore, however, say these changes could have been made by the original editor of the poem to better fit the pseudo-Dutch framework.

Let’s not forget the children. Livingston’s kids and even a neighbor girl were adamant that Henry had been reading them the poem as early as 1807. They even claimed to have an original copy, written in Henry’s hand, complete with revisions and scratch marks. Unfortunately the house containing this valuable evidence burned down, taking all hope of a definitive conclusion with it.

The poems of both authors were analyzed by a professor from Vassar who concluded that Moore could not have written the poem. They found that the style of “A Visit From St. Nicholas” was different in structure and content than anything Moore had previously written. The professor also noted that the anapestic poetic meter seen in the work matched Livingston’s examples.

Stacey Conradt from MentalFloss reports that in 2016 MacDonald P. Jackson, a professor from New Zealand, tackled the mystery in a book, Who Wrote “The Night Before Christmas”?: Analyzing the Clement Clarke Moore vs. Henry Livingston Question. Jackson analyzed works from both authors and found that:

“if we did not know whether the poems in Moore’s manuscript notebook were by him or by Livingston, our full range of tests would, in combination, categorize every one of them as much more probably Moore’s. In this they contrast sharply with ‘The Night Before Christmas,’ which is consistently associated more closely with Livingston.”

Supporters for Moore have shrugged this off, believing that these studies were weighted in Livingston’s favor and ignore several works by Moore in the anapestic meter, like “The Pig & The Rooster.” But these poems do not show the same mastery of the anapestic style that “A Visit From St. Nicholas” exhibits. Jackson says:

“If Moore wrote ‘The Night Before Christmas’ he displayed in it a facility that deserted him in his efforts in the same meter both at about the same time and a decade later.”

To this day, there is no definitive proof one way or the other and with the burning of the Livingston house and the possible original copy, it seems the argument will always be one family’s word against the other’s. Today the poem is still attributed to Clement Clark Moore, and it will most likely remain that way.

We are a participant in the Amazon Services LLC Associates Program, an affiliate advertising program designed to provide a means for us to earn fees by linking to Amazon.com and affiliated sites.