The beautiful Polish tradition of breaking bread on Christmas Eve

The oplatki tradition is one rich in spiritual symbolism, and can even help heal family division.

In many Polish homes throughout the world, a most beloved family tradition is the breaking of the oplatek on Christmas Eve.

The oplatek (oplatki is the plural form) is a thin wafer similar in consistency to a communion host  that is often stamped with an elaborate Christmas scene. Historically these would be distributed by religious to parishioners’ homes during the Advent season.

It is related to an Eastern tradition of giving out “blessed bread” after the celebration of the Divine Liturgy. This bread is not consecrated, but blessed by the priest as a way to extend the fruits of the Mass into the home.

The oplatek is meant to remind families of the Eucharistic bread at Mass and makes a further connection between Christmas and the gift of the Eucharist, the presence of God among us.

On Christmas Eve, the family eagerly awaits the first star in the night sky, recalling the star of Bethlehem that signaled the birth of the Savior. Once the star has been spotted, the Christmas Eve meal begins.

The table is traditionally covered with straw and a white cloth. In some homes this is reduced to a single plate, upon which rests the oplatek, as a symbol of Christ in the manger.

The father (or eldest member of the family) begins the ceremony by taking the oplatek and breaking a piece off of it, giving it to his wife. When he does so, he may say what he is thankful for, wish her good health, or ask for forgiveness.

According to author Sophie Hodorowicz Knab, “My father used to say, ‘OK, I’m not the best, but I’ll try harder’… My mother would always say, ‘You work so hard and I appreciate you for that’ … The sharing of this unleavened bread with another person is sharing all that is good with life … It’s a time to tell each other, ‘I love you, I care about you.’ And you do it in an open area, where everyone else can see you.”

After this initial sharing, the oplatek is then shared with each member of the family in a similar manner, starting with the oldest down to the youngest. It is a touching ceremony, one that can help heal hurts from the past year.

After the breaking of the bread is completed, a small meal is served that eagerly anticipates the Midnight Mass, which many Polish families would attend on Christmas Eve.

The tradition has survived the test of time and is still celebrated in many parts of the world by various families, including many who come from a Slavic ancestry. It is a beautiful tradition, one that keeps the true “spirit of Christmas,” and unites a family to celebrate the birth of Jesus Christ. 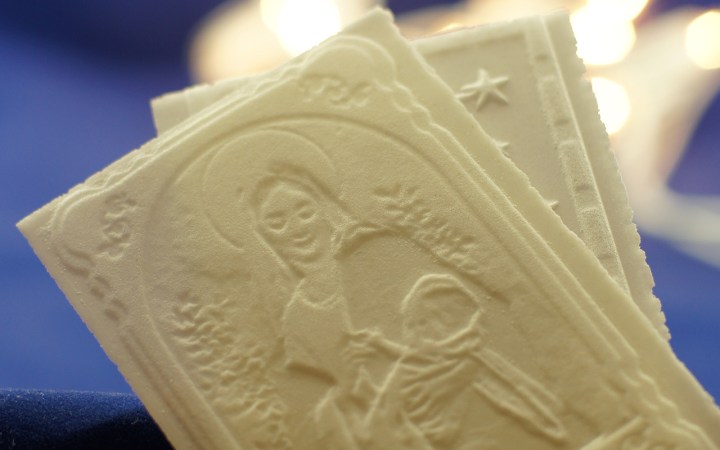