The buzz-worthy sculptures include various scenarios a fetus might encounter in the womb.

Just outside of a women and children’s hospital and research center in Qatar is a startling series of 14 gigantic bronze sculptures. At first, you’re not sure what you’re looking at, and then you realize it’s a newly fertilized human egg, dividing rapidly. Each subsequent sculpture shows another stage of gestation. The sculptures by Damien Hirst, called “The Miraculous Journey,” detail the journey of a newly fertilized life, from conception all the way to birth.

“Ultimately, the journey a baby goes through before birth is bigger than anything it will experience in its human life,” Hirst said. “I hope the sculpture will instill in the viewer a sense of awe and wonder at this extraordinary human process.”

The hospital actually unveiled the statues in 2013, but they were covered up again until this November, on account of the controversy they caused. (A 46-foot-tall naked baby isn’t exactly an ordinary sight in the region.) Now, they’re quickly becoming a landmark, with every tourist stopping to take pictures of the thought-provoking art.

Hirst’s sculptures include various scenarios a fetus might encounter in the womb — one shows a fetus in the transverse position, another shows twins in utero. Most startling of all, and strangely quite lovely, are the first sculptures in the line, when the new embryo looks unfamiliar to our eyes. His tail hasn’t disappeared, his head isn’t rounded out yet — but this stage too, is part of a person’s life. We all looked like that once. Strange and miraculous as it truly is, it’s also about the most ordinary thing in the world. 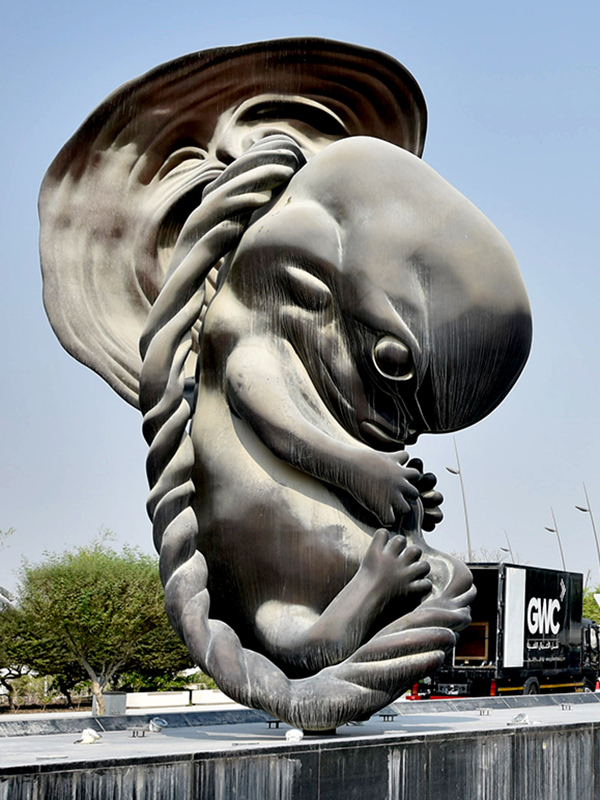