Could it be more fitting? If you know a bit about Pope St. Sylvester, his feast day is just perfect 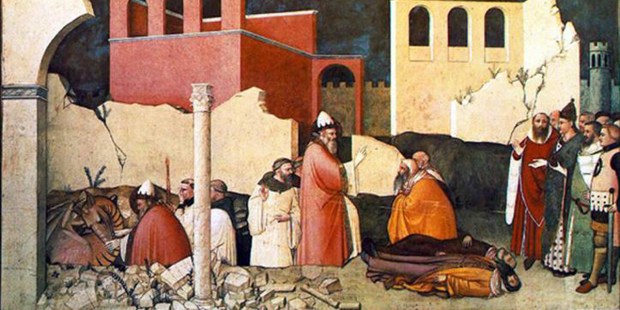 He took Peter’s Throne in the year 314, just a year after Constantine famously conquered under the sign of the Cross, and changed the Empire’s view of Christianity.

There’s a tradition within Catholic theology of making arguments from fittingness. It’s not a strict logical connection, but an almost poetic one, a beautiful thread tying together two seemingly unrelated items. For a faith that believes in a Divine Providence that works in all things, this should not be surprising.

For example, Pope St. Gregory the Great notes the fittingness of Christ being born in Bethlehem. The town’s name means “House of Bread,” and he who was born there was the bread come down from heaven, the bread of life given for the life of the world. In short, with God, there are no coincidences.

With the feast of Pope St. Sylvester today, we see another bit of seeming serendipity that communicates something profound to us.

Very little is known about this holy pontiff. Early sources record his parents’ names, Rufinus and Justa, but nothing else about his early life. Even the content of his pontificate is fairly obscure. But what is known is momentous.

Sylvester became pope in 314, a time of intense turmoil in the Roman Empire. The tetrarachy set up by Diocletian decades before had descended into squabbling and then civil war, with each man seeking the imperial title solely for himself. In 312, two of the chief contenders, Constantine and Maxentius, met in battle at the Milvian Bridge. Inspired by a vision, Constantine had his soldiers fight beneath Christian symbols, the cross and the chi-rho, while Maxentius was a firm persecutor of the Church. Constantine emerged victorious. Maxentius drowned while trying to escape.

Read more:
8 Incredible relics from the Holy Land that St. Helena might have found

The way was clear for a new Roman stance toward Christianity. The previous three centuries had seen periodic persecutions both locally and empire-wide. Now, both of the remaining emperors were friendly toward the faith. Thus, in 313, Constantine and his co-emperor Licinius issued the Edict of Milan, which officially tolerated Christianity and forbade any further persecution. Not only that, the edict ordered all property stolen from Christians to be returned. (Contrary to popular misconception, the edict did not make Christianity the official religion of the empire. That would not happen until 380, when Emperor Theodosius issued the Edict of Thessalonica.)

Thus when Pope Sylvester was elected as the Successor of St. Peter in 314, he found himself in a very different set of circumstances. Whereas formerly Christians had met secretly in homes, during Sylvester’s pontificate the emperor himself would construct several massive churches in the style of the Roman bureaucratic palace, the basilica. St. John Lateran and the original St. Peter’s were built at this time.

Another monumental event would take place a few years later. In the wake of the Arian crisis, Constantine called together all the bishops of the world, not to his new eponymous capital, Constantinople, but the hot springs resort just across the Bosporus, Nicaea. It was the first ecumenical council of the Church. Yet the pope, the bishop of Rome and head of the apostolic college, did not himself attend, sending two legates instead, one of whom presided over the council in Sylvester’s stead.

Pope Sylvester reigned over a Church that was transitioning from hidden liturgies and secret meetings to a publicly supported role in civic life. His ministry came right at the time when the light was dawning and the page was turning (to mix a few metaphors). Likewise, his feast day falls on the last day of the calendar when we anticipate a new year, and the time of the seasons when the darkest days are behind and the light is increasing. Fitting! Though not intentional.

As with many saints, Pope Sylvester’s feast day was assigned to the day of his death. The confluence of events was not intended by anyone—save Providence itself, perhaps.