From a long life on earth to eternity in Heaven 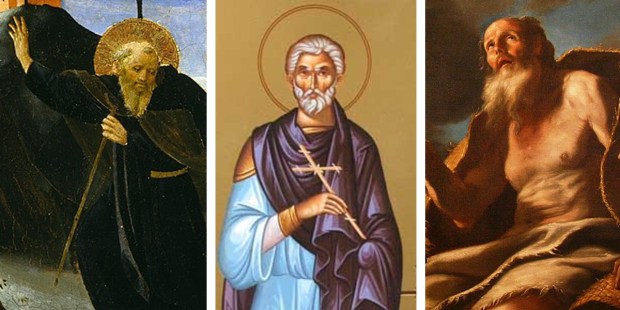 Many saints die young. Some live to be more than 100!

Many saints lived such difficult lives that their time on earth was short. But that’s not always the case. Here are some saints who kept right on journeying on this earthy pilgrimage even after their 100th birthday.

Anthony was born in Egypt in the year 251. His parents were wealthy landowners, but they died when he was about 18 years old, leaving him and his young sister on their own. Inspired by the words of Jesus to “sell what you have and give to the poor, and you will have treasures in heaven,” he did just that. He placed his sister with a group of Christian virgins and headed out to the desert to live a life of an ascetic hermit.

St. Athanasius, who knew Anthony and was his biographer, wrote, “Anthony was not known for his writings nor for his worldly wisdom, nor for any art, but was simply known for his reverence toward God.”

The Christian world considers Anthony the “Father of Monasticism.” He organized followers into communities of worship, and his influence spread across Egypt. He was a man who lived in the desert, ate bread, drank water, wore skins, and slept on the ground. Yet, drawn by his intense faith and love of God,  people flocked to him.

Anthony lived a life of solitude, fasting and hard labor, loving God as much as he could. He died at the age of 105.

Read more:
How does a saint become “the Great”?

Paul the Hermit was born circa 230 near Thebes, Egypt (he is also known as Paul of Thebes). St. Jerome, Paul’s biographer, considered him the first Christian hermit. However, many believe St. Anthony the Abbot was the first hermit. The irony is, Anthony and Paul were close friends.

In the year 249, Paul had fled to the desert when Emperor Decius began persecuting Christians. He found a small oasis with palm trees and a cave near by. The palm fronds provided clothing for him and small fruit from the tree sustained him for more than 40 years. Then (according to writings) a raven began bringing him a half loaf of bread each day.

Eastern Catholic hagiography tells of Anthony the Abbot visiting Paul several times. Thee records describe how the two men shared the bread brought by the raven; they blessed it and, breaking it together, consumed it. Paul was 115 years old when Anthony visited him again. It was during this visit that Paul died.

Anthony wrapped Paul in a tunic and buried him. Legend has it that two lions helped Anthony dig the grave. The artwork depicting St. Paul the Hermit shows him with a palm tree and two lions alongside him. His feast day is January 15.

Eusignius is a fascinating fellow. He was born in Antioch in the 3rd century and served in the Roman armies for 60 years. When Constantine the Great ascended to the throne, Eusignius was present and a witness to the miraculous appearance of the cross in the sky that prompted Constantine to embrace Christianity.

Eusignius embraced the Christian faith also and, retiring from his military service, entered into a life of prayer, fasting, and attending church services. However, in 361, Julian the Apostate became emperor. He held a deep-seated desire to reject Constantine’s Christianity and have the empire return to paganism.

Eusignius stood trial before Julian for refusing to reject his Christian faith. He reprimanded Julian and told him he was an apostate. He rebuked the emperor for not following the example of Constantine. Julian ordered Eusignius to be executed.

At the age of  110, the former military officer of the Roman army was beheaded for his Christian faith. Today the statue of St. Eusignius stands among the colonnade of saints that surrounds St. Peter’s Square.