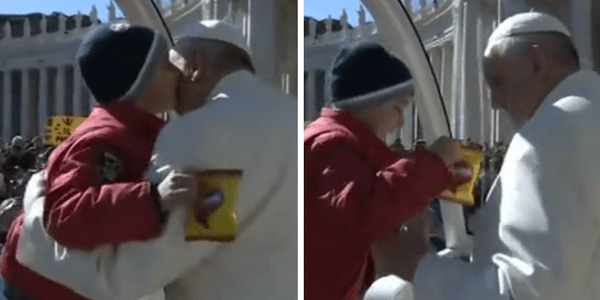 It was a simple gesture, but a beautiful one.

It was April 2014. Amidst the multitude of 25,000 people gathered in St. Peter’s Square to see Pope Francis and hear his Wednesday catechesis, a boy had the chance to hug the Holy Father when the Popemobile passed by — and to give him a gift of something highly valued by kids (and by most adults, honestly): a bag of potato chips.

Many people like to give the Pope gifts during those encounters. Pope Francis has received books, zucchettos, yerba maté (traditional South American tea), a sign to hang on his door saying “Complaining prohibited” (which he actually did hang on his door), sports jerseys, and a scarf with the colors of his favorite soccer team (San Lorenzo), among other things. Why not a bag of potato chips?

It was, in short, a perfectly normal day in St. Peter’s Square: kids being kids, and Pope Francis being himself! Blessed be God.

And yes, there’s video of the moment …