In Michigan Fat Tuesday is Pączki Day, a celebration of Polish doughnuts 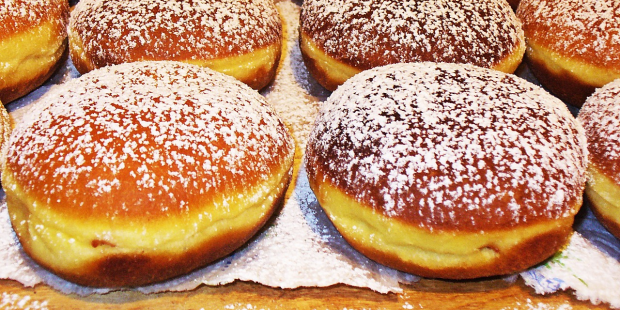 For one week per year, pączki reign as the supreme pastry.

By now, we’ve all heard of King Cakes, the traditional Epiphany and Mardi Gras cake which comes in many forms across the globe, but in Michigan, they have a different celebratory pastry for Fat Tuesday — the delectable Polish doughnuts known as pączki. People around the Great Lakes go crazy for pączki, reserving a whole week on their calendars to eat their fill of this seasonal treat. Locally, Fat Tuesday has become known as Pączki Day.

Pączki (pronounced POON-shkee; the singular is pączek, pronounced PON-check) are made from deep-fried flat dough filled with fruit or cream and lightly dusted with powdered sugar. The traditional fruit filling is prune, but these days they come in a wide variety of flavors including apricot, lemon, blueberry, raspberry, chocolate, and custard.

While they appear to be little more than jelly doughnuts at a glance, the dough used is rich with yeast and will not collapse when bitten. In America they are made much larger than the size traditional in Poland, with a great deal more filling added. In Poland, pączki — which means “little packages” or “doughnuts” — have just a bit of filling to be found as a surprise, which is a little more befitting the name.

The reason why people get so excited for pączki is that it is a seasonal treat. Since the Middle Ages, people have used recipes for pączki as an excuse to use up all the lard, sugar, and eggs they had left in their cupboards before their Lenten fasts began.

Jennifer Polasek, from Awesome Mitten, explains that pączki were not always the sweet treat we know and love today:

It was Polish King August III who revolutionized these pastries from savory to sweet thanks to his indulgent spirit and the French cooks who worked in his castle. These simply sweet treats have even united classes. In ancient times, the wealthy savored over rich game while peasants dined on cabbage and jellied pigs’ knuckles. However, pączki were commonly loved by both upper and lower classes.

If you’re up in Michigan, or in Illinois, you probably already know where to get the best pączki, but for those of us who are uninitiated in the ways of Polish pastry, it’s a good bet that any Polish bakery in your area is already taking orders for pączki.

What? You say there’s no Polish bakery near you? Never fear, the internet is here! Just follow this simple recipe and you’ll soon be enjoying your very own tray of delectable Polish doughnuts! After all, the meals, or in this case pastries, you make yourself are always the sweetest.