The symbolism of the iconic San Damiano cross

St. Francis of Assisi was praying before the Byzantine-style crucifix when he received a commission from God to rebuild the Church.

The San Damiano cross, one of the most recognizable symbols in Christianity, has its roots in the Franciscan tradition. When St. Francis was in his early 20s, he knelt before the Byzantine-style cross hanging in the dilapidated chapel of San Damiano near Assisi, and heard the Crucified Christ say, “Francis, go rebuild My house; as you see, it is all being destroyed.”

View the slideshow for a look at the symbolism of the San Damiano Cross (Source: Fr. Michael Scanlan). 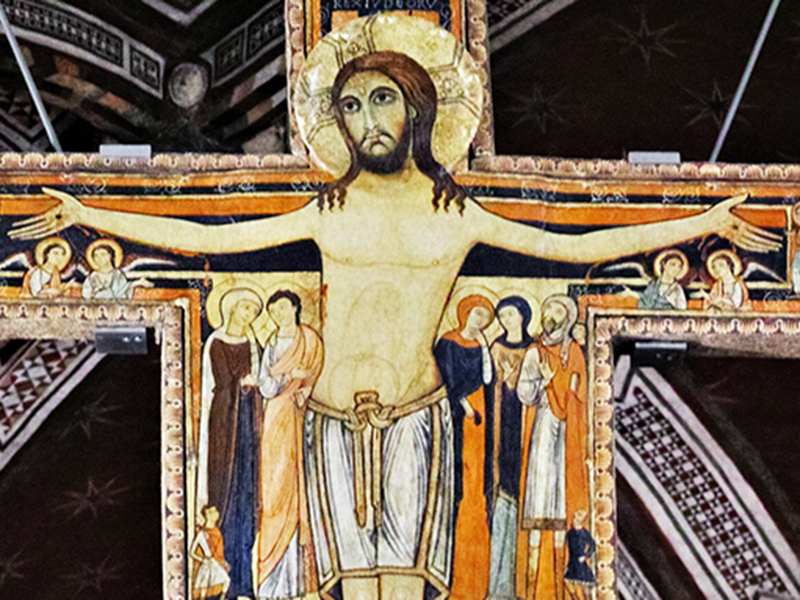 The Franciscan friar Thomas of Celano, author of several hagiographies of St. Francis, recalled the event in its entirety:

“With his heart already completely changed—soon his body was also to be changed—he was walking one day by the church of San Damiano, which was abandoned by everyone and almost in ruins. Led by the Spirit he went in to pray and knelt down devoutly before the crucifix. He was shaken by unusual experiences and discovered that he was different from when he had entered. As soon as he had this feeling, there occurred something unheard of in previous ages: with the lips of the painting, the image of Christ crucified spoke to him. ‘Francis,’ it said, calling him by name, ‘go rebuild My house; as you see, it is all being destroyed.’ Francis was more than a little stunned, trembling, and stuttering like a man out of his senses. He prepared himself to obey and pulled himself together to carry out the command. He felt this mysterious change in himself, but he could not describe it. So it is better for us to remain silent about it too. From that time on, compassion for the Crucified was impressed into his holy soul. And we honestly believe the wounds of the sacred Passion were impressed deep in his heart, though not yet on his flesh.” —Second Life, #10, Francis of Assisi: Early Documents, Volume 2: The Founder, New City Press, p. 249

The cross was painted by an unknown artist around the year 1100, and was in the style of a icon cross, designed as a teaching tool to strengthen the faith of an illiterate people.

When the Poor Clares left San Damiano for San Giorgio in 1257 they brought the cross with them. In 1957, it was placed in public view for the first time above the altar of the Basilica of St. Clare in Assisi, Italy, where it remains today. A replica of the original crucifix hangs in the chapel of San Damiano convent in Assisi.

Painted on walnut that had cloth glued onto it, the San Damiano Cross depicts the Paschal Mystery in one icon: the story of the death, resurrection and ascension of Christ.