Aleteia has exclusive photos of the bare marble, exposed for the first time in nearly 300 years.

For pilgrims visiting Rome, the Pontifical Sanctuary of the Holy Stairs, a staple of the Roman pilgrimage since the Middle Ages, just became the most important stop. After over a year of restoration, the 28 steps that make up the “Scala Sancta” were reopened with the protective walnut boards removed, displaying the bare marble to visitors for the first time since 1723.

Surrounded by walls ornamented with beautiful frescoes, the faithful will ascend the hard marble stairs on their knees while praying and meditating on the Passion of Jesus. The popular devotion is based on an ancient Christian tradition that tells us that the 28 steps Jesus is said to have climbed on the day he was sentenced to death by Pontius Pilate were transported to Rome in 362 by St. Helena, the mother of Emperor Constantine.

ABC News reports that the boards will be left off for the next two months, until Pentecost. During that time pilgrims and faithful will be able to climb the bare marble on their knees. Perhaps it is due to the abundance of visitors over the centuries, or maybe it is because they spend extra time ascending the steps on their knees while praying, but deep indentations have been scored into the marble staircase, marking the prayerful passage. 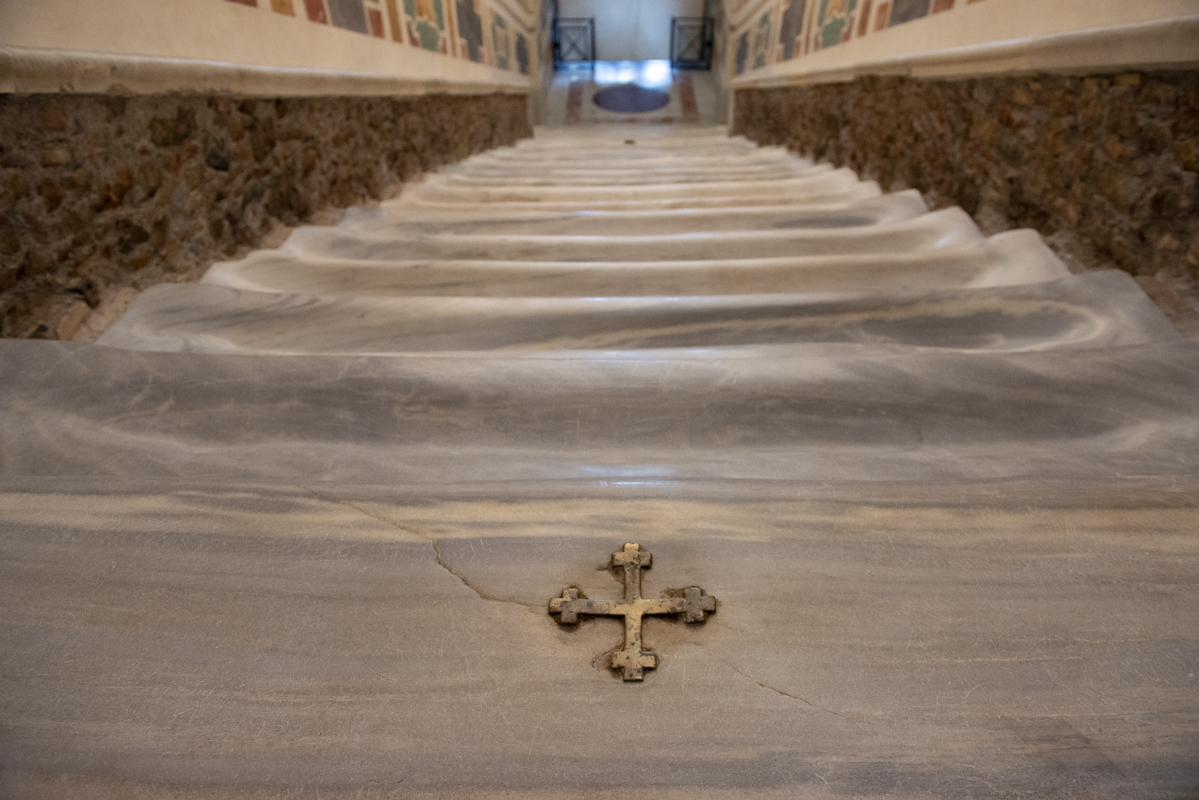 Prior to the unveiling ceremony, the Vatican Museum restorers, who have been working to restore the entire sanctuary for six years, described the experience of uncovering the stairs as “moving.” The boards had previously covered the steps as well as three bronze crosses embedded into the marble, darkened spots believed to be stained with Christ’s own blood, and even scores of notes, photos, coins and votive offerings, left by pilgrims since the staircase was last cleaned in the 1950s.

The restoration of the sanctuary included the cleaning of the extensive frescoes, which cover 18,000 square feet of the walls and ceilings. As restorers returned these priceless works of art to their original splendor, they uncovered stories of devotion in the ancient graffiti left behind by the devout. ABC News said one example was from a slave who came to give thanks for being free of his Turkish master.

A large crowd gathered for the unveiling, and came forward to kiss the first step after Italian Cardinal Angelo De Donatis, vicar general of Rome, blessed the newly unveiled steps. Pilgrims will be allowed to ascend the stairs on their knees, as they have done for centuries, although they will be asked to don plastic shoe covers in order to protect the marble.