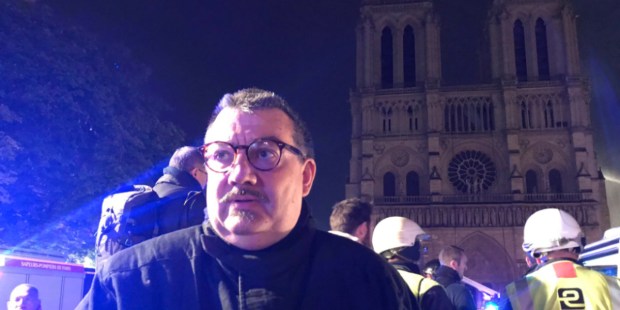 Father Fournier reveals that he blessed the Church before he escaped with the Blessed Sacrament, asking Jesus to save his house

The hero firefighter chaplain who saved the Crown of Thorns and the Blessed Sacrament from Notre Dame Cathedral has given more details about the daring rescue.

Father Jean-Marc Fournier spoke with a reporter from France’s KTO Catholic channel, explaining that when he retrieved Our Lord in the Blessed Sacrament, he blessed the church with the Eucharist: “Here I am completely alone in the [nave of the] cathedral, in the middle of burning debris falling down from the ceiling, I call upon Jesus to help us save His home.”

“I did not want to simply leave with Jesus: I took the opportunity to perform a Benediction with the Blessed Sacrament.”

Read more:
‘He made straight for the relics’: Firefighter chaplain saves Crown of Thorns

Father Fournier said it was probably this blessing along with the excellent work of the firefighters that led to both towers being saved.

The rescue of the Crown of Thorns was a particular challenge because of the safe in which it was kept.

Father Fournier explained, “I was escorted by a senior officer; the difficulty was in finding the code to the safe that sheltered the Crown of Thorns. This took us much time, and during this quest for the code, a team of firefighters was trying to break open the safe, which they did just as I got ahold of the keys.”

The priest also reflected on why he chose to do what he did:

Everybody understands that the Crown of Thorns is an absolutely unique and extraordinary relic, but the Blessed Sacrament is Our Lord, really present in his body, soul, divinity and humanity and you understand that it is hard to see someone you love perish in the blaze. As firefighters we often see casualties from fire and we know its effects; this is why I sought to preserve above all the real presence of Our Lord Jesus Christ.

Father Fournier also remarked that the burning cathedral gave him an insight into Hell.

As I entered the cathedral, there was little smoke and almost no heat, but we had a vision of what hell may be: like waterfalls of fire pouring down from the openings in the roof …

He also said that inside the cathedral, the safety of the firefighters was forefront on his mind. “Artwork can be reproduced,” he said, “a human life can’t.”

The chaplain said the terrible blaze was like a “miniature Lent.”

Remarking how we start Lent with the imposition of ashes and the exhortation, “Remember that thou art dust,” he said the cathedral “went to ashes, not to disappear, but to emerge stronger, as we Christians are, after the Resurrection of Our Lord Jesus Christ.”

Read more:
Here’s the genius invention that helped save the interior of Notre Dame