Meet Deborah, the only female warrior-judge of the Old Testament 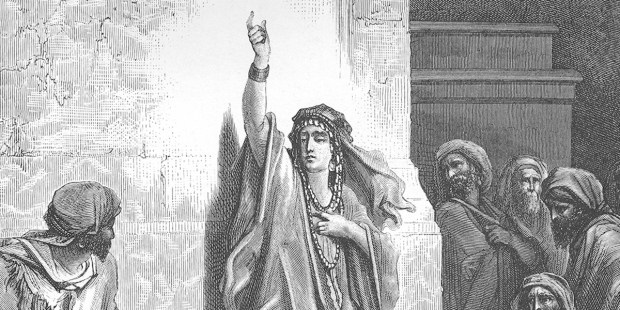 Deborah led the people of Israel into battle and was a wise judge over her people.

Before Israel cried out for a king, God sent to his people “judges,” military leaders who commanded the Israelite armies in battle and delivered them from their enemies. This was before Israel was organized into a centralized kingdom and was more or less a loose association of familial tribes. Gideon and Samson are probably the most well known judges of Israel.

Interestingly, among the military leaders who led Israel to victory was Deborah.

Her unique role is briefly described in the book of Judges.

Now Deborah, a prophetess, the wife of Lappidoth, was judging Israel at that time. She used to sit under the palm of Deborah between Ramah and Bethel in the hill country of Ephraim; and the people of Israel came up to her for judgment. (Judges 4:4-5)

During her time she accompanied an army into battle and explained to her general, “I will surely go with you; nevertheless, the road on which you are going will not lead to your glory, for the Lord will sell Sisera into the hand of a woman.” (Judges 4:9).

According to biblical scholars, “Deborah judged and led Israel for 60 years in the 12th century B.C. Her oversight covered approximately 20 years of national hardship before the Canaanite war and then a peaceful aftermath of 40 years.”

Furthermore, “Deborah first was recognized as a prophet, then as judge/leader, next in a military role, and finally as a songstress. She judged under a palm tree—a setting, rabbinic tradition maintains, that validated her fairness, openness, and refusal to show partiality.”

Yet, the people of Israel recognized her most of all as a “mother in Israel,” one of the highest honors of the Israelite people (Judges 5:7). Scholars further explain how the title is “Probably one of the highest designations in scripture; it indicates authority.”

Even though the life of Deborah is restricted to two chapters in the book of Judges, her legacy endures to this day and she remains an inspiration, recognized for her fairness and courage to do what was right during a time of national crisis.

Read more:
7 Queens, princesses and royal women who were saints