The story of Joan of Arc’s life is a superhero comic book storyboard waiting to be written: at age 18, a young peasant girl, with the heavenly help of St. Michael the Archangel, leads the French army to victory, paving the way to the end of the 100 Years War.

If Joan of Arc hadn’t already existed, Marvel Comics’ Stan Lee would probably have invented her.

So it’s no surprise that Philip Kosloski, spirituality writer for Aleteia and founder of Voyage Comics & Publishing, seized on St. Joan’s story as the subject of his upcoming comic book project. Kosloski made his comics debut with the publication last year of the Finnian and the Seven Mountains series, an epic fantasy adventure based on the ancient Christian history of the island of Skellig Michael.

When Kosloski set out to tell St. Joan’s story, he knew that the story of the heroine of French history would resonate with secular as well as religious readers.

“Joan of Arc is one of those rare saints who is held up by both the Church and the secular world as an inspirational hero. She inspires both fervent Christians and the most hardened agnostics,” said Kosloski.

“I chose her story because of its universal appeal and its ability to speak to people in every generation,” he said.

Kosloski gives us a taste of what’s to come on his Kickstarter page, which he launched to raise money to produce the series, which will tell the story of St. Joan of Arc from her own perspective. Sample pages show scenes from Joan’s life, medieval battles, and the appearance of St. Michael, the ultimate caped crusader. 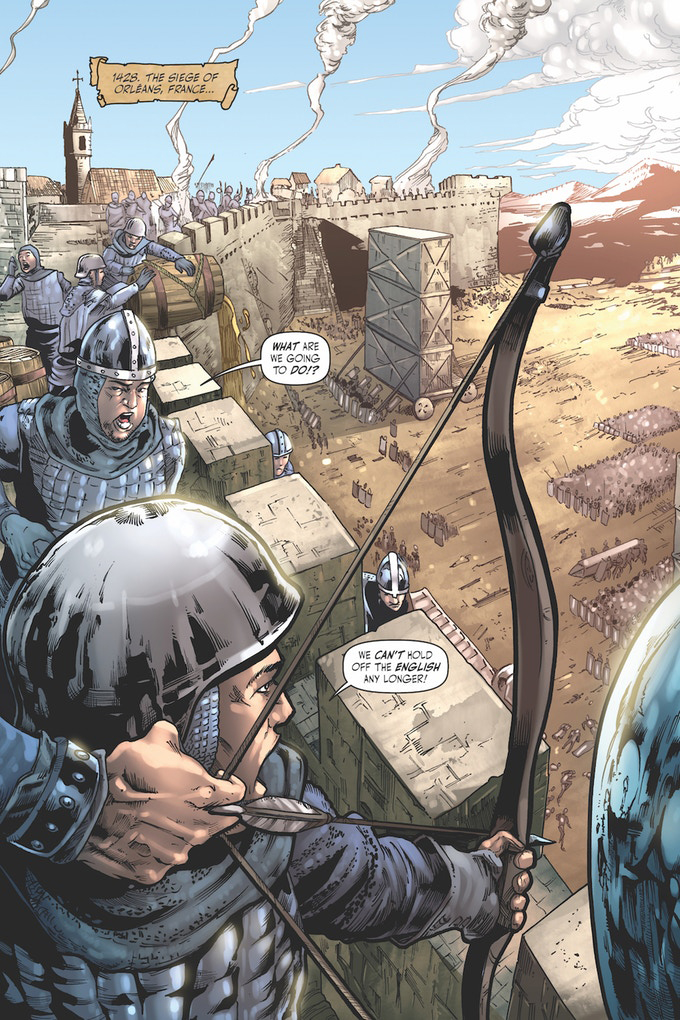 “This first issue will primarily center on the reception of her ‘mission’ from God and the beginning of the battle at Orleans. Subsequent issues will follow her short military career and how St. Michael the Archangel helped her along the way,” explained Kosloski.

In conducting research for the project, Kosloski read the transcripts of St. Joan’s trial before her English captors, and was fascinated by her description of encountering St. Michael.

“I knew that St. Joan of Arc heard ‘voices,’ but she describes them more as ‘visions’ that she saw with her eyes. I never knew that and I wanted to explore that in a particular way,” said Kosloski.

“In this comic book St. Michael the Archangel is a central character, visible to Joan of Arc. She talks about this in her trials and has difficult explaining what he looks like,” he said.

“I decided to feature him without wings, as she doesn’t mention anything about wings in her trials and technically, angels don’t have ‘wings’ in the theological sense, though they are often depicted with them in popular art,” Kosloski said.

The entire supernatural aspect of the history of Joan of Arc has often been “discredited as hallucinations or far-fetched dreams,” Kosloski said.

“However, I believe in Joan of Arc, her humble beginnings and extraordinary visions. it takes a belief in the supernatural to see that Joan of Arc was telling the truth and wasn’t a misguided young girl who randomly lead French armies to victory.”

Following the successful conclusion of the Kickstarter fundraising campaign, Kosloski and his team of comic book artists, Alexandre Nascimento, Jesse “Cadre” Hansen, Iwan Joko Triyono, and Jaymes Reed from Cornerstone Creative Studios, hope to have the first issue published by July 2019. A pledge of $10 or more entitles the donor to a copy of the printed comic book. Those who contribute more can receive additional copies of the comic book, t-shirts, and a Joan of Arc Battle Flag Medallion.

Pre-orders of the first issue can now be made through his website.