Your children read your heart and mind. Do they find God there? 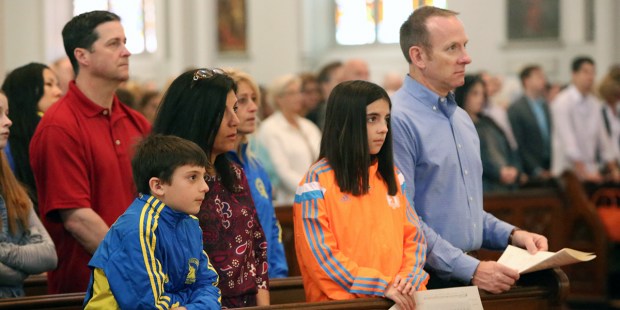 I was recently reminded of my own childhood atheism when I saw two celebrity stories on YouTube.

I stopped believing in God when Mao died. My cat Mao. I was eight and I prayed that he would come back. He didn’t. So much for “Ask and it will be granted to you,” I thought.

My objection could have been easy to clear up, but nobody cleared it up. My mother took us to church regularly but we never really discussed the faith.

I was recently reminded of my own childhood atheism when I saw two celebrity stories on YouTube. They spotlight the role parents play in the faith of their children.

Ricky Gervais stopped believing when he saw the “body language” of his family.

The British actor and comedian described his own experience of disbelief at age 8. He was drawing a crucifix for Sunday school when his 19-year-old brother Bob asked him “Why do you believe in God?”

“And I knew,” Gervais recounts. “I learned it through body language. She was hiding something from me, and he was telling me the truth. It took me minutes to work it out.”

There is a grave danger in embracing religion with our wills but not our minds.

Gervais explained that his mother was counting on religion to be a “babysitter” for him, to keep him out of trouble.

Julia Sweeney, who was a 1990s Saturday Night Live cast member, has her own story of disbelief. In Ted Talks and a film, she tells a funny story about her growing suspicions about everything her parents were telling her about God — and Santa Claus, too.

The turning point comes, though, when she is an adult who hears Mormon missionaries tell her what they believe: Jesus visited America after the Resurrection, as is shown in the Book of Mormon which Joseph Smith found written on golden tablets in “Reformed Egyptian” that could only be translated by a “seer stone.”

At first, she finds their gullibility amusing. Then it dawns on her: The Catholic story she has been told would sound just as fantastical if she wasn’t so used to it.

This leads her to reject religion entirely.

While every religion has to deal with the question, “Which of all of these competing accounts of God is true?” Christianity is like one big answer to that question. Christianity exists because Jesus rose from the dead. If he rose, then Jesus’ story about God is the right one to believe. If he didn’t, it’s not. The evidence says he did.

Read more:
What the oldest Easter homily we have tells us about God

But her story suggests another way Christians fail to pass on the faith: We believe with our minds but not our hearts.

In her stories, Sweeney’s parents seem to be true believers who know something about their faith — but in her telling, come across as legalistic, focused on a literal interpretation of the “age of reason” and on sin as rule-breaking.

If you are a parent, your children are going to read your mind and heart.

Someone once said that when we evangelize we are like hungry beggars who have found free food. Our children need to catch from us the sense that our faith answers a deep hunger we have — for what our hearts long.

To encourage my children to embrace Christianity with their minds, I try to talk about God often with them. I anticipate questions they might leave unspoken, and when I find my own faith falters on one point or another, I ask them questions. This both models what to do when you don’t understand something in the faith and often elicits some pretty effective arguments from them.

To encourage them to embrace Christianity with their hearts, I don’t just pray with them — I pray a lot without them. For one thing, they might catch me praying and know that it’s real.

More important, when they look into my heart — and I know they will — I want them to find something authentic there.

Read more:
This beautiful prayer for after Communion reminds us that Jesus is everything we’d ever want