Is your child being bad, or does he just feel unsafe? 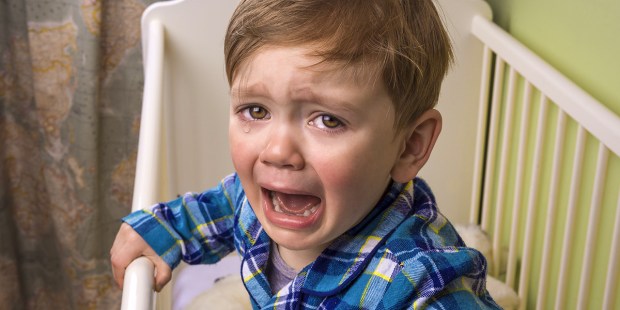 I recently made an unfortunate discovery. It turns out, whenever I raise my voice with my 4-year-old, his behavior is guaranteed to get worse. I say “unfortunate,” because raising my voice is pretty simple, but finding the patience and gentleness necessary to work with him when he’s driving me crazy … well, it takes a bit more effort.

It’s not my speaking volume that’s counterproductive, either. Threatening him with being sent to his room or forfeiting dessert or something seems to ramp up the tantrums, too. I figured I’d go for positive reinforcement (read: bribery), but to my dismay, offering him rewards for good behavior seemed to do the exact same thing: cause an already melting down child to lose control even more. What gives?

I was prepared to chalk it up to “kids are insane” until I read something that put all the pieces together for me. It’s from pediatric psychologist Mona Delahooke’s new book, Beyond Behaviors. She introduces the distinction between two types of behavior: “top down” behavior, and “bottom up” behavior. Top down behavior is deliberately chosen — the child decides what to do, and then does it. Bottom up behavior isn’t a conscious choice — it’s what happens in a child’s brain and body when he’s feeling threatened.

Don’t we all tend to think that whatever tantrum our kid is in the throes of, it’s something they’re doing on purpose? To get attention, to manipulate, to achieve some goal? Sometimes that’s true (more often with older kids than younger), but it’s important that we consider that what looks like disobedience is really “bottom up” behavior, which the child has less control over than it seems.

Delahooke says it all hinges on the crucial concept of “neuroception,” which is the “the brain’s and body’s constant subconscious monitoring of threat and safety.” When the child instinctively feels unsafe, he will instinctively try to defend himself from the threat, “fighting, fleeing, or shutting down. When an individual experiences the neuroception of safety, on the other hand, she relaxes and can reach out to others, communicate, comply and engage.”

That tantruming child might be a child who desperately wants to calm down and do what you asked, but literally doesn’t know how. Her neuroception is telling her that she’s not safe, and her basic survival instincts, trying to protect her, have taken the wheel.

In my son’s case, the promise of rewards or the threat of banishment to his room only made him panic even more. He wanted to control himself, but that didn’t change the fact that he didn’t know how to do that. On top of a lot of fear he didn’t understand, now he had frustration to deal with, too.

So how can you help a child who’s taken over by “bottom up” behavior? You have to make them feel safe. Even if they’ve been safe all along, you have to help them see it. That starts in your own body. What the child needs isn’t motivation, it’s education. It’s our job to teach our children, with words, but first with action, that he’s safe.

So you model the calm that you want him to find. Make sure you are breathing normally and speaking at a normal volume, and that your posture is relaxed. What you’re doing is called “emotional co-regulation,” and it’s the foundation that enables a child to eventually learn to self-regulate. It says to your child’s body and mind that they are safe.

We always want to reason with the child, don’t we? We say “Calm down! There’s nothing to worry about!” And when that doesn’t work, we get frustrated. Delahooke says that we can reason with a child, absolutely, but that should be step three. She lays out three “R’s” to guide us: First Regulate, then Relate, (so that he knows you’re in this together), and only then, Reason. A child who isn’t feeling calm and cared for isn’t capable of being logical.

We parents need to speak our child’s whole language. We need to educate their minds, but also their bodies. And in the end, we owe it to them in justice to not punish them for behavior that’s outside their control, or ask them to do what they’re unable to do. By understanding what’s going on in our child’s brain, we can better address what’s behind the behavior and experience better outcomes.

Read more:
3 Ways to pray with your kids before they go to sleep