How to squash sibling squabbles in 3 easy steps 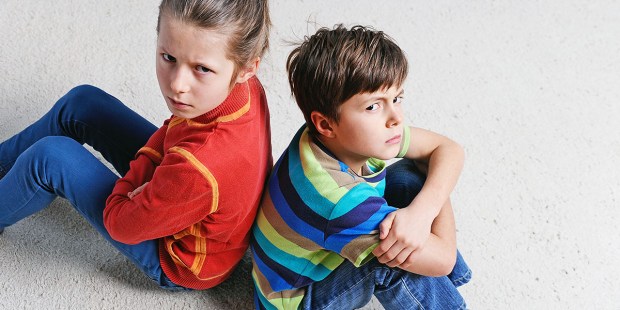 Learning to resolve conflict requires practicing virtue, so taking the conflict away isn’t the answer.

Confession time: I’m terrible at helping my kids resolve conflicts. It’s not for lack of trying either—for years, I stressed about how to help my kids work through conflicts. I finally settled on a method that seemed calm, caring, and—at least in theory—effective.

I sit the parties involved down and give them each a turn to give their version of events while the other one has to listen. Then I identify faults on both sides, because one child is rarely as blameless as he or she believes. I ask them to take responsibility for their actions, apologize, and tell each other how they’re going to avoid that behavior in the future.

Sounds foolproof, right? I thought so. But in the years I’ve relied on this method, I’ve found that it’s not merely ineffective, but also antagonistic. My kids are never satisfied with my judgements, they rarely take genuine responsibility for their actions, and the net result is that the conflict isn’t resolved, it’s merely prolonged. They bide their time, nursing their resentment and letting it simmer until a larger conflict eventually erupts. Over time this has created unhealthy patterns in sibling relationships, where certain sibling sets are constantly fighting over the same thing, in ever more creative formats.

I’ve gradually abandoned my conflict-resolution strategy over the last year, mostly due to lack of time and energy now that I work full-time. But I haven’t replaced it with anything, unless you count exasperated orders to “stop fighting” as a conflict resolution strategy. (Spoiler alert: it’s not.)

Yesterday, we were in the pool when a fight erupted among my three middle children. At first I stepped in to try and solve it, which made it worse. Then I told them to stop fighting or get out for 10 minutes. They chose the latter, but after the 10 minutes were up they got back in the pool and resumed their fight without skipping a beat. Feeling defeated, I did something I’d never done before: I put in my earbuds, turned on some music, and ignored them completely.

Five minutes later, struck with guilt and apprehension, I took my earbuds out and prepared to dive into the conflict again. Lo and behold, there was no longer a conflict. They were all three playing happily together, having worked it out themselves.

This got me thinking … what if ignoring sibling squabbles until they worked it out is actually the key? After all, conflict resolution has to be organic to genuinely resolve anything. So naturally, I consulted my BFF Google and found an earth-shattering 3-step program for parents like me, courtesy of Dr. Charles Fey (CEO of Love and Logic Institute). Here’s my quick-and-easy cheat sheet on Dr. Fey’s primer for squashing sibling squabbles without losing your mind:

1
Take yourself out of the equation

Kids fight for various reasons (most of them subconscious), and a primary one is to get their parents’ attention. The best thing you can do is remove the source of motivation by removing yourself—or, more accurately, telling your children to continue their argument somewhere else. It doesn’t have to be nasty or harsh—you can just say, “Feel free to continue this argument someplace where it doesn’t hassle my eyes or ears.” This has the dual benefit of removing a potential motivating factor and giving your kids the opportunity to develop real, organic conflict-resolution skills.

If your kids refuse to leave the room or try and involve you in the conflict, don’t take the bait. Even more importantly, don’t react with irritation or anger. Stay disengaged and tell them how sad it is that their fighting has interrupted whatever you’re doing, whether it’s a phone call or making dinner. Then ask how they’re going to repay you for interrupting your task and your peace. They’ll probably stare open-mouthed the first few times, so have a suggestion at the ready. Raking the yard, taking out the recycling, peeling the potatoes—any task that will suffice as reparation.

Y’all, this one took me aback, but it was written by the expert and my own strategies haven’t exactly been award-winning. If your kids resist doing the chore, Dr. Fay recommends going on strike. No kidding, you should tell your kids you’ll be happy to do everything you do for them when they decide to contribute to the family as well. Then follow through—which means your fighting kids get cold cuts and fruit for dinner, or whatever they can help themselves to (not Goldfish, y’all).

It might seem like this hands-off approach to conflict resolution is neglecting an opportunity to teach your kids how to develop virtue, but it’s actually the opposite. We parents spend a lot of time talking to our kids about virtue … yet the way they actually learn what virtue looks like is by watching our examples. The best opportunity for them to practice virtue themselves is in the midst of conflict, so we need to let them take those opportunities by removing ourselves from the equation. They’ll never learn how to be humble, forgiving, and compassionate if we force them to act that way—they have to choose it on their own. So next time your kids start bickering, just let them.

Read more:
5 Ways to Bring Peace to Your Home — Even With Kids