Centuries-old practice is proving effective as a pesticide 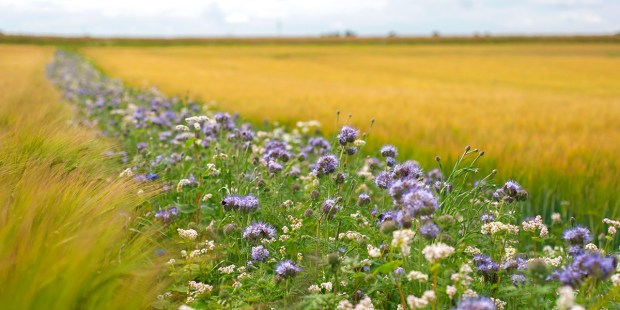 Farmers are turning to nature to maintain a healthier ecosystem.

One of the big issues farmers have to contend with is keeping their crops pest-free. It’s so easy for an infestation of insects to wipe out a harvest, which then has a huge impact on the farmer’s food production and income. Although the agricultural industry has turned to pesticides, some farmers are looking for ways to control their crops in a way that is healthy for the environment and the consumer. In fact, organic farmers are now turning to practices carried out by previous generations by actually using flowers as a means of pest control.

The idea, according to a report in Fast Company, is to line the field of crops with strips of flowers that act as a “bug highway.” Insects like parasitic wasps, which are useful as they eat crop-destroying aphids while they are still larval, can find a home among the flowers and can act as a natural pest control.

In the past it was common practice for farmers to surround their crops with flowers to boost biodiversity. However, innovative farmers are adding these strips of flowers in among the actual crops, allowing the useful insects to be more effective and cover a wider area.

Experts at the Center for Ecology and Hydrology in the UK Ben Woodcock and Richard Pywell are studying the most beneficial planting techniques to make sure the right balance is created, and introducing the right sort of bugs in the right area.

Thankfully, modern technology is assisting the researchers in their work, and through GPS mapping and precision application technologies it is possible to maximize the effects of flowers as a natural pesticide, according to Green Matters. Woodcock and Pywell recognize that although there will probably still be a need for pesticides, through this more natural approach “pest populations are maintained below levels at which they cause damage to crops for longer periods, thus reducing the number of pesticide sprays applied.”

The use of flowers also has an impact further along the ecosystem. With the disturbing rise in beehive death — a phenomenon that is put down in part to the overuse of pesticides, and that saw America’s beehives nearly halved in recent years — providing bees with more flowers to pollinate, and using fewer pesticides, might have a positive impact on the bee population.

So as ecological farmers all over the world experiment with different mixes of flowers and bugs, let’s hope they can use the natural remedies God initially provided us with to help both the agricultural industry and the damaged ecosystem.