Survey says most Americans are not approaching clergy members for advice 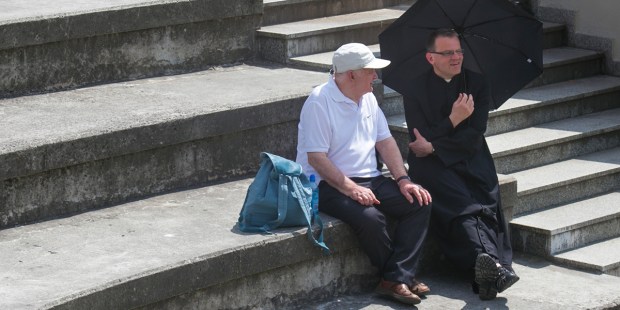 The findings of the survey were similar in all denominations of Christianity.

A recent poll taken by The Associated Press-NORC Center for Public Affairs Research has found that roughly 75% of Americans do not seek out clergy members for advice, and the 25% who ask for guidance do so with irregularity. The findings of the survey were similar in all denominations of Christianity.

Jeff Karoub of NBC11 News reports that while a third of Americans surveyed said they attend church at least twice a month, about a quarter said they never go. Those who attend church regularly are the most likely to go to a priest for advice, but only about 16% of those who never attend, or attend infrequently, consider clerical consultation.

While the majority of those polled said they identify with a specific religion, about half of them said they have little interest in, or are influenced very little by, religious leaders.

Karoub cites several factors that might explain the disinterest in religious perspective. In the Protestant faiths, it could be due to the size of a worship community. Timothy Buchanan, a regular non-denominational church member, suggests that it becomes difficult to make a personal connection when a church becomes too large. He told NBC11 News:

In Catholicism, it is suggested that the recent scandals have played a huge role in the disinterest in creating personal relationships with parish priests. Researchers interviewed a 72-year-old Catholic parishioner, Jo King, who says she regularly attends Mass and considers her faith “very important.” However, she rarely approaches a priest to help with a decision. She said:

“I used to consult periodically with them … when I was younger, but I rarely consult with anybody. I kind of live my life my way.”

Karoub believes one of the greatest factors is the presence of Google. With the answers to so many questions at our fingertips, it seems almost counter-intuitive to spend time finding a priest when a search engine could give information promptly.

He interviewed Tim O’Malley, a theology professor at Notre Dame University, who supported this theory, saying:

“Think about the use of Google. You can literally Google anything. Should I have children? What career should I have? When should I make a will? How do I deal with a difficult child?

“In this sense, there has been a democratization of information based on the seeking self,” he added. “You can find the information more easily through a search engine than finding a member of a clergy.”

As the number of priestly vocations diminishes, making clergy less present within most communities than they used to be, spending more time at church is the best way to encounter them. That American church attendance has fallen so far may explain why so many people are unfamiliar with their parish priest or minister, and may not even think of seeking guidance from them when the time comes to make an important decision.

It is worth noting that we don’t have to wait until the end of Mass to have a moment with a priest. Every parish makes its priests available for private consultations and confessions. While most churches do have set hours for such visits, a brief phone call to the rectory is all it takes to receive valuable advice based on the religious teachings of our faith.