Does the Bible mention any words said by Mary Magdalene? 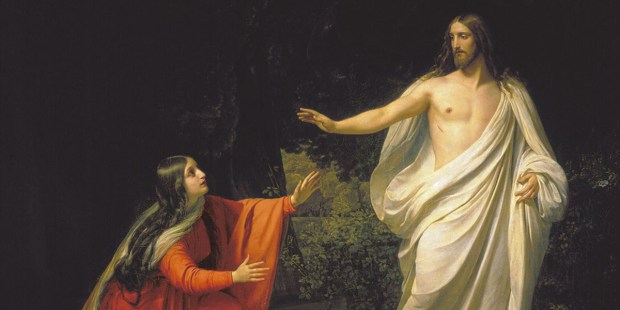 Mary Magdalene doesn’t appear much in the Bible, but when she does, it is significant.

Mary Magdalene is one of those biblical characters who does not get much “screen time,” but when she does, it is during the most pivotal scenes in the entire Bible.

For example, those few faithful disciples at the foot of the cross included “Mary Magdalene and Mary the mother of James and Joseph, and the mother of the sons of Zebedee” (Matthew 27:56).

When most of the other apostles were afraid and left Jesus to his crucifixion, Mary Magdalene was there to offer her consoling presence.

Then immediately after Jesus rose from the dead, Mary Magdalene went to the tomb and Jesus appeared to her. This is where Mary Magdalene speaks for the first and last time in the entire Bible.

But Mary stayed outside the tomb weeping. And as she wept, she bent over into the tomb and saw two angels in white sitting there, one at the head and one at the feet where the body of Jesus had been. And they said to her, “Woman, why are you weeping?” She said to them, “They have taken my Lord, and I don’t know where they laid him.”

When she had said this, she turned around and saw Jesus there, but did not know it was Jesus. Jesus said to her, “Woman, why are you weeping? Whom are you looking for?” She thought it was the gardener and said to him, “Sir, if you carried him away, tell me where you laid him, and I will take him.” Jesus said to her, “Mary!” She turned and said to him in Hebrew, “Rabbouni,” which means Teacher. Jesus said to her, “Stop holding on to me, for I have not yet ascended to the Father. But go to my brothers and tell them, ‘I am going to my Father and your Father, to my God and your God.’” Mary of Magdala went and announced to the disciples, “I have seen the Lord,” and what he told her. (John 20:11-18)

This is the only certain passage where Mary Magdalene speaks, as she often gets confused with other unnamed women in the Gospels and even other Marys, such as Mary of Bethany.

The only verifiable words we have from Mary Magdalene say much about her character and her deep love of Jesus. She also becomes the “Apostle to the Apostles,” being chosen by Jesus to announce his resurrection to the remaining 11 apostles.

She may not have much to say in the Bible, but when Mary Magdalene speaks, it is profound and comes at the climax of the entire story of salvation history.