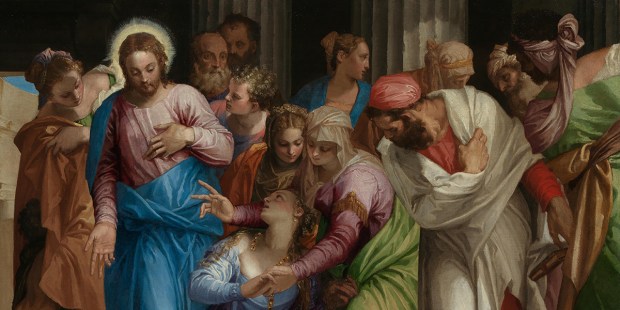 We need some training to be more like her.

Of course, repentance is needed on the part of the clergy and hierarchy for enabling and covering up sexual abuse.

But repentance is also needed by lay people for our own sexual scandal. As Pope Benedict XVI told U.S. bishops, “What does it mean to speak of child protection when pornography and violence can be viewed in so many homes through media widely available today?”

What does it mean to protect children when their parents have themselves accepted so many sexual anomalies and excesses?

Mary Magdalene shows the way to the repentance that the Church – meaning us – needs.

Talking about Satan’s role in sin can sound like avoiding personal responsibility. But in the ultimate act of repentance Catholics make, when we are baptized, we reject Satan, his empty promises, and his works.

There is no denying it: Satan’s role in sin is immense. Much of what is wrong with the world today is that it conforms more to his empty promises than Christ’s plan.

Mary Magdalene is referred to twice in the Gospels as the disciple of Jesus “from whom seven demons had gone out.” Many of us reject Satan theoretically, but still flirt with him, by keeping a hand in the things he likes. Mary Magdalene broke with him for good.

When many of us repent and follow Jesus, we may be subconsciously planning to actually lead Jesus more than follow him. We continue to do the kind of things we would do anyway, but tell ourselves that Jesus is with us.

Mary Magdalene is listed among the women who traveled with Jesus. In other words, she got off one path and got on another — Jesus’ path.

Third: True repentance shows up in your wallet.

Mary Magdalene is also listed (in Luke 8:2-3) as one of the women who provided for the disciples “out of their means.”

That is another aspect of following Jesus: It means your bank account looks different. It means that instead of considering your money your own, you consider it Christ’s, and use it to alleviate the needs of others.

The best way to explain the discrepancy is that Magdalene moved closer to the cross.

She modeled the movement every Catholic needs to make. The crucifix looms large in our churches. But we need to make a move toward it. The Church in fact provides ways to do that: the Friday sacrifice, the weekly Stations of the Cross, the Sorrowful Mysteries of the Rosary.

True repentance turns away from sin and stays away. It accepts that sin is bad for me and has no more to do with it, and turns to Christ and sticks with him.

False repentance isn’t that straightforward. We turn away from sin but look back. We turn toward Christ but when his connection to us feels weak, sin’s pull overwhelms us. We are stuck to sin, not Jesus.

The presence of Jesus’ grace in her life is so significant that Mary Magdalene can’t keep it to herself.

For her this is because she literally witnessed the resurrection — via the angel, the earthquake, the empty tomb and meeting Jesus himself.

Her response was to tell other people about it. She rushed back to the Apostles to tell them what she had seen. She insisted on it, even as others considered what she said an “idle tale.”

Read more:
Interview: What happens when you meet Mary Magdalene in Magdala?

Seventh: True repentance looks not for the minimum but for the most.

Many of us do the bare minimum. We confess mortal sins, and we sort of try to fight against temptation. We learn what we absolutely must do — the Sunday obligation, the precepts of the Church — and we do that.

Mary does the opposite. She inserts herself into Jesus’ path, grabs at him, and never wants to let go.

Ironically, this “excessive” attitude toward Jesus is part of the minimal requirement of the Church.

When we go to confession, we promise to avoid not just sin, but to avoid the near occasion of sin. When we repent at Mass, we confess sins “in my thoughts and in my words, in what I have done and in what I have failed to do.”

The fact that we do this so often shows that we are not all as good at repentance as Mary Magdalene. Or maybe it’s training to be more like her.

Mary Magdalene, pray for us!

Read more:
Why Mary Magdalene can help us receive Communion with greater love