The cross that withstood an atomic bomb returns to Nagasaki 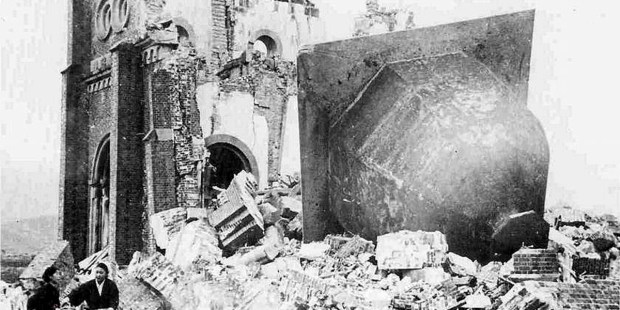 A large wooden cross that was present for and withstood the bombing of Nagasaki is being returned to Japan after three-quarters of a century abroad.

At 11:01 on the morning of August 9, 1945, 74 years ago today, American forces dropped an atomic bomb on the Japanese city of Nagasaki. The explosion would instantly claim the lives of about 40,000 people, with tens of thousands falling to the effects of nuclear fallout in the following months.

At the time, Nagasaki was widely regarded as the center of Catholicism in Japan, largely thanks to the efforts of St. Francis Xavier, who devoted his life to evangelizing in the Eastern world. On that fateful morning Nagasaki’s Immaculate Conception Cathedral was caught in the blast, and the entire church was toppled. Miraculously, however, the large wooden cross atop the building survived.

A US Marine stationed in Nagasaki 74 years ago took home a cross retrieved from the rubble of a bombed-out cathedral, eventually giving it to an Ohio college. On Tuesday, @WilmingtonColl returned the long-missing artifact to Nagasaki: https://t.co/wAwzhvEkyQ pic.twitter.com/dPd4PKicZY

Maryann Cusimano Love, an international relations professor at the Catholic University of America, noted to CNA:

CNA reports that the cross was discovered by Walter Hooke, a Catholic and a US Marine stationed in Nagasaki, who was taken by the undamaged symbol of his faith standing amidst the destruction. Hooke brought it home to his mother, who eventually had it donated to the Peace Resource Center, an organization that houses reference materials related to the atomic bombings of Hiroshima and Nagasaki.

Now, in a “gesture of peace and reconciliation,” the cross is to be returned to Nagasaki, to Immaculate Conception Cathedral, which was rebuilt in 1959. Maus explained that he decided to return the cross after he learned that the community had been searching for the cross’ whereabouts for the last 75 years. Of the donation he said:

“Very few artifacts from the cathedral were retained and that’s why it’s crucial to give back that cross, which is so deeply tied to their identity.”