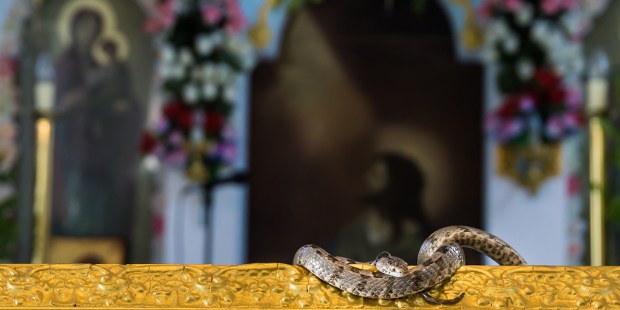 The friendly snakes appear each year on the Greek island of Kefalonia, always around the Solemnity of the Assumption.

In 1705 a group of Orthodox nuns living on the Greek island of Kefalonia were worried about pirates that were threatening their monastery. With no way to defend themselves, the nuns prayed to the Virgin Mary for help. She responded by sending a host of snakes to their monastery, which in turn scared away the pirates, who didn’t want to go any further.

According to the Catholic News Agency, “Since then, the small black snakes, known as European Cat Snakes, appear every year just before the feast [of the Assumption, known in the Orthodox Church as the Dormition], and make their way to the walls and entryways of the Church to ‘venerate’ the silver icon of Mary known as the Panagia Fidoussa, or the Virgin of the Snakes. The snakes’ patterning can produce a small black cross on their head, and they have a forked tongue, adding to the legend that these snakes are marked by the sign of the Cross.”

The snakes rarely fail to appear every year at the same time; in the past 100 years there were only two such occasions. According to the Greek City Times, “the snakes of the Virgin Mary have failed to appear twice. The first time in 1940, shortly before the outbreak of World War II and the second time in August 1953, when Kefalonia suffered a tremendously destructive earthquake. Thus, it is believed to be ominous if the snakes do not appear.”

The snakes are surprisingly friendly and are easily handled by anyone who comes near them. They are found in the Orthodox churches of Kefalonia and slither their way around the icons of the Virgin Mary.

It is a miracle that is celebrated every year and draws a large crowd to the island, with many people flocking to the churches to see the snakes and pray to the Virgin Mary in thanksgiving for her miraculous protection.

The fact that the snakes are connected to the Virgin Mary is very biblical, as God spoke to Satan in his serpentine form that “They will strike at your head, while you strike at their heel” (Genesis 3:15). This verse is traditionally interpreted to refer both to Jesus Christ and the Virgin Mary. For this reason the Blessed Mother is traditionally depicted as stepping on the head of a snake.

In a certain sense these snakes could symbolize the Virgin Mary’s authority over Satan and how even the snakes pay homage to her.

Furthermore, since these snakes are easily handled by anyone, it also brings to mind the passage from Mark’s Gospel, “They will pick up serpents [with their hands]” (Mark 16:18).

Whatever the motive of these snakes, the local people see the snakes as a reminder of God and his miraculous protection of his people.