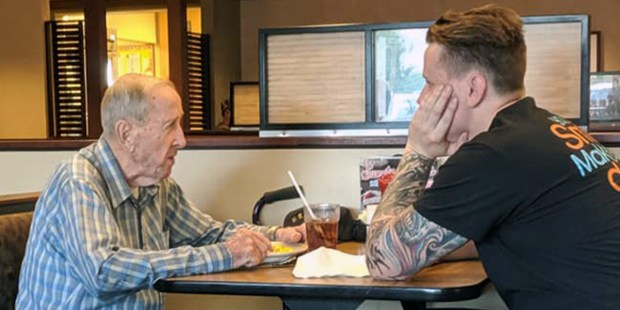 Many are being touched by this beautiful example of being compassionate to the most vulnerable members of society.

Growing old can be a lonely and frightening experience, especially if your loved ones are no longer with you. This was recently highlighted on social media when a woman decided to share a heartbreaking yet heartwarming exchange she recently witnessed.

Lisa Meilander of Pennsylvania was having a meal with her family at a local restaurant called Eat’n Park when she spotted another diner trying to order his food, as reported by Kake.com. The 91-year-old World War II veteran was sitting alone and was apologetic to his waiter, Dylan Tetil, for needing some extra help with his order since he’d left his hearing aids at home. What happened next was truly love in action …

Tetil squatted down to speak to Frank so he could help him place his order. He waited patiently as the elderly customer explained how his hearing had been damaged during the war, and continued to chat about what he’d experienced. Tetil listened attentively. He didn’t rush the gentleman, he didn’t make conciliatory sounds, he truly took in what Frank had to say.

In her post, Meilander went on to explain how Frank shared with the waiter the reasoning behind his chattiness: “I’m alone now and I don’t often have someone to talk to.” Meilander, herself, wanted to be able to help in her own way by offering to pay for Frank’s meal, but the kind-hearted waiter had already paid for it. And what’s more, when Dylan was on his much-needed break he sat with Frank to listen to him some more.

Meilander was quick to praise Tetil in her post. “With all of the negative stories about our youth today this was a breath of fresh air. I wonder if I would have been as kind and attentive if I were the one working there,” she said.

While it’s true that Tetil demonstrates all that is great in our youth, he also showed a depth of compassion that we should all try to emulate, especially towards the more vulnerable among us.

Read more:
What happened when a homeless man asked for a meal with 50 cents

Read more:
Who will make life or death decisions for increasing number of elderly without family?