The oldest church in the U.S. is the Catholic San Miguel Chapel in Santa Fe

Built between 1610 and 1628, the church still offers Masses on Sundays.

The San Miguel Chapel, an adobe Spanish colonial church in Santa Fe, New Mexico, is the oldest known church in the continental United States. Built sometime between Santa Fe’s founding in 1610 (ten years before the Pilgrims landed at Plymouth Rock) and its first documented reference in 1628, the church still celebrates Masses to this day. 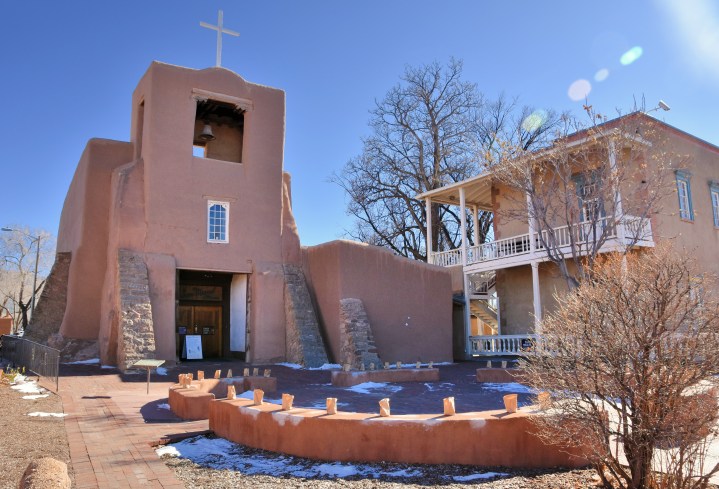 A Franciscan mission in New Mexico

The history of San Miguel Chapel begins in 1539, when the Spanish missionary-explorer Fray Marcos de Niza, while searching for the legendary “Seven Cities of Gold,” came across the Zuni Pueblo in western New Mexico. Upon planting a cross, he declared the region the “New Kingdom of St. Francis.”

It wasn’t until 1598 that his dream became a reality. In July of that year, 10 Franciscans, along with 129 soldiers and 400 men, women and children, established a colony under the leadership of Juan de Oñate, 35 miles north of Santa Fe along the Río Grande, according to an account at Franciscan Media.

A church built by indigenous people

San Miguel, which was referred to in the 1628 document as a Hermitage or military chapel (the “Hermita de San Miguel”), was built sometime after the colony moved south to Santa Fe in 1610. According to David Blackman of Preserve San Miguel, the chapel was probably built by Tlaxcalan Indians under the direction of the Franciscans.

The chapel was partially destroyed by fire during the Pueblo Revolt in 1680, an uprising of the indigenous Pueblo people against the Spanish colonizers, which killed 400 Spanish and drove 2,000 settlers out of the province.It was rebuilt in 1710 after the Reconquest of Santa Fe in 1693 by Don Diego de Vargas.

In 1859, the chapel was transferred to theBrothers of Christian Schools, and served as the Chapel of St. Michael’s College from 1859 until 1969 when the school — now St. Michael’s High School — moved to a new location.

A 1955 renovation uncovered the the original dirt floor and sanctuary steps, which can be seen today just beyond the communion rail.

The chapel holds Mass on Sundays — Latin Mass at 3 p.m. and Ordinary Form Mass at 5 p.m.