250,000 children were saved from the streets of New York by these holy women

Courtesy of the Bruno Family

The Sisters of Charity of New York celebrate the 150th Anniversary of the New York Foundling Hospital.

Childhood memories are generally few and far between, but there are those that are indelibly etched in the annals of our mind. They’re not always of incredibly significant importance, or necessarily of some trauma we experienced. Often there’s no apparent reason why we remember what we remember … but for whatever reason, the memories remain.

On a warm spring day in 1973 I sat with my parents in a cavernous room with a few other adults somewhere in New York City. A door opened on the far side of the room and a bunch of small children ran in, accompanied by all noise and disorder that children bring. To my mother and father’s credit, they agreed to choose the first child that entered the room, who was a 2 ½ year old Black/Puerto Rican boy named Vincent. This is what I remembered when I learned that the New York Foundling Hospital was about to celebrate its 150th anniversary this year.

When Sister Mary Irene and her companions set about the work of rescuing orphans from the teeming streets of post-Civil War New York in 1869, they began a work of charity and mercy the impact of which would live on far beyond their days.

It began one October evening when Sister Irene placed a small white, wicker cradle inside the doorway of their rented house at 17 East 12th Street with a sign that read, “Let it be known far and wide, do not abandon your children, bring them to me.” They awoke to find a crying infant named Sara with a note begging the Sisters to care for her. Over the next few weeks they received more than 40 babies and it became apparent that they would need a strategy to care for this massive influx, and fast. 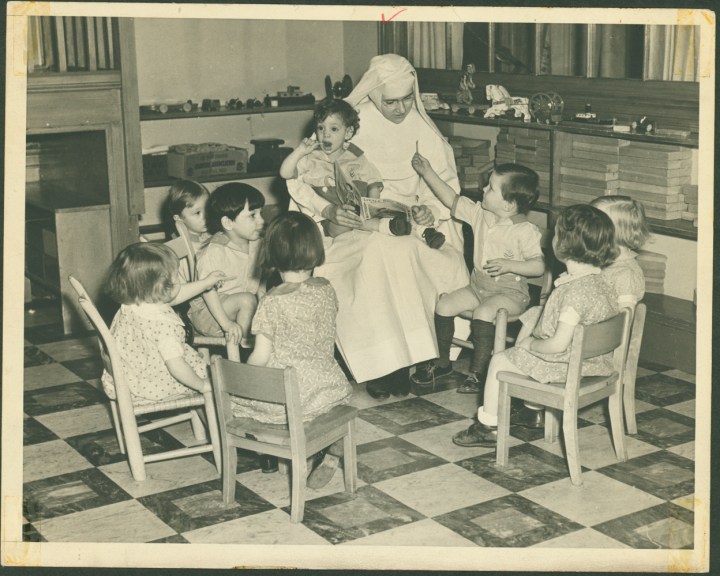 They organized the neighborhood and placed some children in the care of Catholic families, while making arrangements to move from the overpacked house they resided in to a larger home at 3 N. Washington Square. In the four years that followed, the Sisters took in more than 2,500 children.

The steady increase of children entering their care gave birth to a robust foster care and adoption program that remains one of the hallmarks of New York Foundling’s work. As the years passed, the Sisters responded with great innovation to the changing needs of those they served, adding services including a shelter for women in crisis pregnancy, healthcare and parenting education. One notable innovation was the creation of the “Crisis Nursery” in the 1970s in collaboration with Dr. V. Fontana, so parents who felt they were losing control could place their child there temporarily while they took some time to calm down.

Vincent, who changed his name to Jamaal, is my brother. He was one of the over 250,000 children who passed through the Sisters of Charity’s New York Foundling Hospital over the years and found a permanent home with a family that loves him. And we grew up together as naturally as blood, but with the added benefit of our lack of resemblance, which allowed us to play a number of tricks on the unsuspecting.

It’s one thing to write about the heroic efforts of a particular person or religious order, but it’s quite another to be directly impacted by their works. The Sisters of Charity and New York Foundling continue on carrying the spirit and mission of their original foundress, St. Elizabeth Ann Seton, and continue to bring hope and loving support to those whose lives hang in the balance and are most vulnerable.

So Happy 150th Anniversary, New York Foundling. May the work you do continue to give hope to children and families, and speaking as a once-young boy who grew up with a brother thanks to you, know that we are eternally grateful.